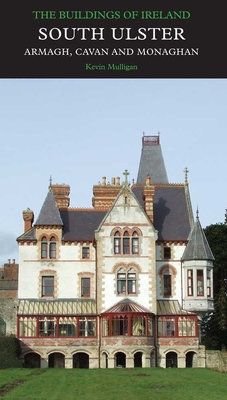 The South Ulster volume of the Buildings of Ireland covers the inland counties of Cavan, Monaghan and Armagh, an area stretching from the thinly populated uplands around the Cuilcagh Mountains and the cradle of the Shannon to the fertile Blackwater Valley and the southern shores of Lough Neagh. The architecture of the region is as varied as the landscapes that receive it, with building materials adding to the variety while ensuring that the buildings – whether vernacular in spirit or more formally designed – express a deep sense of belonging.

“Mulligan, denied the vast store of earlier research on which the authors of volumes in the English series could draw, proves a heroic pioneer. Major discoveries which will draw enthusiasts into this territory . . . may be few, but minor pleasures abound . . . And armed with South Ulster, the traveller is unlikely to be mistaken for a clandestine supporter of a proscribed organization, but a hunter after worthwhile buildings.”—Toby Barnard, Times Literary Supplement
— Toby Bernard

“Be warned: if you dip into this book you will go on dipping, or perhaps weeping, at the beauty of it all. It is the standard work for anyone even vaguely interested in the history of landmark buildings in these three counties.”—Paul Clements, Irish Times
— Paul Clements

‘This is not only a book of reference but one which brings buildings and architecture to life, a most worthwhile addition to the literature on the architectural heritage of Ireland.’—Peter Rankin, Burlington Magazine
— Peter Rankin

Kevin Mulligan is an architectural historian.