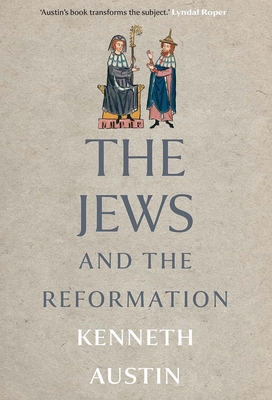 The Jews and the Reformation

​In this rich, wide-ranging, and meticulously researched account, Kenneth Austin examines the attitudes of various Christian groups in the Protestant and Catholic Reformations towards Jews, the Hebrew language, and Jewish learning. Martin Luther’s writings are notorious, but Reformation attitudes were much more varied and nuanced than these might lead us to believe. This book has much to tell us about the Reformation and its priorities—and has important implications for how we think about religious pluralism more broadly.

Praise For The Jews and the Reformation…

"Austin’s examination of Christian attitudes to Jews during the Reformation throws fascinating new light on the turbulent history of early modern Europe. Bringing Catholics as well as Lutherans and Calvinists into his story, Austin shows that virulent anti-Semitism coexisted with a growing interest in the Hebrew language, stimulated by debates about the Bible’s meaning."—Tony Barber, Financial Times ‘Best Books of 2020: History’

“A comprehensive, fluent, and judicious introduction to every important intellectual, political, and social aspect of the Jewish-Christian relationship in Early Modern Europe … Poses a compelling argument for the complex role of the Jews in Europe’s emerging pluralism.”—Christopher Ocker, author ofLuther, Conflict, and Christendom

“Impressively thorough and insightful, Kenneth Austin’s masterful survey calls attention to a long-neglected aspect of the Protestant and Catholic Reformations … Engaging, enlightening, and authoritative, The Jews and the Reformation deftly analyses a very complex subject with aplomb, interweaving social and intellectual history with the uncommon flair one finds in all enduring classics.“—Carlos Eire, author of Reformations

"Systematically analyses the attitudes of post-Reformation Catholics Lutherans, Calvinists, Anabaptists, to Jews. It’s a fascinating story, well told – and often surprising. Austin shows how varied anti-Semitism could be, and how different religious groupings could take remarkably different positions. The Jews and the Reformation makes it impossible to ignore attitudes to the Jews as part of Reformation history – it transforms the subject."—Lyndal Roper

Kenneth Austin is a senior lecturer in early modern history at the University of Bristol, UK, and the author of From Judaism to Calvinism: The Life and Writings of Immanuel Tremellius.
Loading...
or
Not Currently Available for Direct Purchase