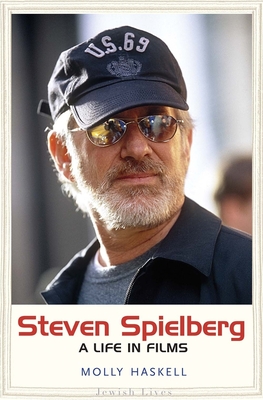 A Life in Films (Jewish Lives)

From the prizewinning Jewish Lives series, a film-centric portrait of the extraordinarily gifted movie director whose decades-long influence on American popular culture is unprecedented

“Everything about me is in my films,” Steven Spielberg has said. Taking this as a key to understanding the hugely successful moviemaker, Molly Haskell explores the full range of Spielberg’s works for the light they shine upon the man himself. Through such powerhouse hits as Close Encounters of the Third Kind, E.T., Jurassic Park, and Indiana Jones, to lesser-known masterworks like A.I. and Empire of the Sun, to the haunting Schindler’s List, Haskell shows how Spielberg’s uniquely evocative filmmaking and story-telling reveal the many ways in which his life, work, and times are entwined.

Organizing chapters around specific films, the distinguished critic discusses how Spielberg’s childhood in non-Jewish suburbs, his parents’ traumatic divorce, his return to Judaism upon his son’s birth, and other events echo in his work. She offers a brilliant portrait of the extraordinary director—a fearful boy living through his imagination who grew into a man whose openness, generosity of spirit, and creativity have enchanted audiences for more than 40 years.


Praise For Steven Spielberg: A Life in Films (Jewish Lives)…

“A swift and elegant introduction to Spielberg’s life and work.”—David Denby, New Yorker

"'Everything about me is in my films,' Spielberg once said. Yet in this compact study of a sprawling career, Haskell comes close to presenting a unified theory of a director who entertains multitudes, and contains them too."—Victoria Segal, Sunday Times

"A superbly readable portrait of the man through his movies . . . this meeting of the minds of the critic and the director turns out to be exceptionally fruitful."—Kate Muir, Times (London)

"The exploration here is lively, the critic is deeply informed, and she approaches her mandate with a calmness of inquiry that is a gift often bestowed on the outsider anthropologist impervious to tribal influences."—Lisa Schwarzbaum, New York Times Book Review

"Luckily, Molly Haskell is far too wise a critic to be flummoxed by Mr. Spielberg’s seemingly critic-proof oeuvre. She nails Mr. Spielberg when he needs to be nailed . . . Ms. Haskell’s great on the movies that give her something to write about, like 'Duel,' 'Jaws,' and 'Empire of the Sun.'"—Scott Eyman, Wall Street Journal

"As Haskell delves into her subject, however, she discovers the influences and challenges that shaped this outsize figure in American mainstream cinema, including his denied, then embraced Jewish faith, and comes up with a compelling and remarkable figure."—Sarah Jilani, Times Literary Supplement

"In a long nomadic career of film writing, the feminist critic Molly Haskell has never wild about Spielberg, her taste steeped in the great auteurs, her signature a coolly playful rigour. Unexpectedly, this makes her the perfect biographer for a director with a life-long weakness for treacle. Spielberg emerges with his credibility enhanced for having been put through the wringer."—Danny Leigh, Financial Times

"Legendary movie critic Haskell weaves Spielberg’s entire body of work through her captivating narrative, providing a poignant study of him as a person and a filmmaker."—Publishers Weekly

"Haskell’s discussion of the childlike wonder inherent to many of the director’s films and her eloquent defense of some of his riskier, less successful movies is particularly valuable. . . . Recommended for readers of film criticism or commentary."—Library Journal

"With sharp observations and wise judgments, the author discusses her subject's work with sprightly, accessible prose. . . . Compact, incisive, and witty—a great starting point for those interested in Spielberg's life and art."—Kirkus Reviews

"It’s a high compliment to any book that when it ends, you wish it wouldn’t. . . . Very entertaining."—John Anderson, Newsday

"[A] slender, uncommonly absorbing critical biography . . . which chronicles with exquisite care and wonderfully animated prose the path leading from the ancestral milieu of mid-century Cincinnati . . . through the various triumphs (and intermittent misfires) in the Hollywood dream factories. . . . Even if she may not like all of Spielberg’s films equally well . . . Haskell does not hold back her praise or her trenchant, frequently illuminating criticism."—Noah Isenberg, New Republic

"Invaluable. . . . Spielberg's lucky to have Haskell. She's tough on him for his boyishness, for his recurring images of threatened masculinity, but she still gives him a fair, incisive reading, neither fawning nor dismissive. . . . And we're even luckier to have her, as each page of her survey is as packed with pleasures and revelations as the best scenes in his best films."—Alan Scherstuhl, LA Weekly

"[Haskell offers] nuanced and often deeply sympathetic accounts of [Spielberg’s] films . . . [and] discerns the essential matter of a life story that might otherwise be reduced to the most fragmentary evidence."—Geoffrey O’Brien, New York Review of Books​

"Molly Haskell has produced a page-turner, one that takes the familiar material of the filmmaker’s life and work and makes it new through its graceful twin analysis of his biography and filmography. . . . Sophisticated and succinct."—Carrie Rickey, Film Quarterly

"Molly Haskell, one of our most essential authorities on the movies, has written a fascinating, witty, acutely discerning book about a subject that would seem, at first glance, odd. But what a spectacular match it proves to be! Spielberg is given his proper due, and Haskell outdoes herself."—Phillip Lopate, author of American Movie Critics

"Steven Spielberg and Molly Haskell—the great producer-director of modern film and one of the most intelligent and sensitive film writers we have ever had. The result is as rich and intriguing as the meeting of Elliott and E.T. We know the Spielberg films, or we think we do, until they come under the cool yet warming gaze of Ms. Haskell. As a result, we are the more fascinated with Spielberg and the more encouraged by the principle of essential and enlightening film commentary."—David Thomson, author of A Biographical Dictionary of Film

"Molly Haskell’s writing is always thought provoking and rife with insight. She skillfully argues that Hollywood’s most commercially successful film maker has, over a forty-five-year career, produced a series of highly personal films that give voice to the director’s inner conflicts and longings. This persuasive re-think will no doubt intrigue fans and, in fact, anyone who has ever watched a Spielberg movie. A must for anyone interested in a serious look at popular cinema."—Joseph Egan, author of The Purple Diaries

"This is a wonderful book, at once personal and critical, eloquent and vivacious. The book vibrates with a productive tension between the writer and her subject."—Morris Dickstein, author of Dancing in the Dark and Why Not Say What Happened

Molly Haskell is a film critic and the author of five previous books, including FromReverence to Rape: The Treatment of Women in the Movies, and Love and Other Infectious Diseases. She writes and lectures widely on film. She lives in New York City.
Loading...
or
Not Currently Available for Direct Purchase