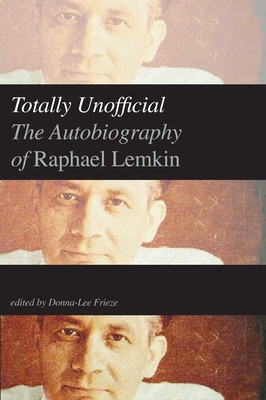 The Autobiography of Raphael Lemkin

The never-before published autobiography of Raphael Lemkin, a giant among twentieth-century ethical thinkers

Among the greatest intellectual heroes of modern times, Raphael Lemkin lived an extraordinary life of struggle and hardship, yet altered international law and redefined the world’s understanding of group rights. He invented the concept and word “genocide” and propelled the idea into international legal status. An uncommonly creative pioneer in ethical thought, he twice was nominated for the Nobel Peace Prize. Although Lemkin died alone and in poverty, he left behind a model for a life of activism, a legacy of major contributions to international law, and—not least—an unpublished autobiography. Presented here for the first time is his own account of his life, from his boyhood on a small farm in Poland with his Jewish parents, to his perilous escape from Nazi Europe, through his arrival in the United States and rise to influence as an academic, thinker, and revered lawyer of international criminal law.


Praise For Totally Unofficial: The Autobiography of Raphael Lemkin…

"If the history of the Western moral imagination is the story of an enduring and unending revolt against human cruelty, there are few more consequential figures than Raphael Lemkin—and few whose achievements have been more ignored by the general public. . . . Totally Unofficial is at its most alive when he evokes his childhood in the Jewish world of Eastern Europe before World War I. . . . Vivid chapters of Lemkin's autobiography describe the incredible odyssey of his escape."—Michael Ignatieff, New Republic
— Michael Ignatieff

Raphael Lemkin (1900–1959), US jurist and Holocaust survivor, served as adviser to the U.S. War Department during World War II and played a crucial role in the discussions leading to the 1948 UN Convention on the Prevention and Punishment of the Crime of Genocide. Donna-Lee Frieze taught a graduate unit on genocide at Deakin University in Melbourne, lectures frequently on the Holocaust and genocide, and is a 2013 Prins Foundation Senior Scholar at the Center for Jewish History in New York City. She has digitized Lemkin’s entire autobiography, the original of which is held in the New York Public Library.
Loading...
or
Not Currently Available for Direct Purchase