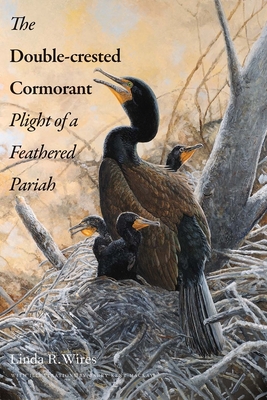 Plight of a Feathered Pariah

The double-crested cormorant, found only in North America, is an iridescent black waterbird superbly adapted to catch fish. It belongs to a family of birds vilified since biblical times and persecuted around the world. Thus it was perhaps to be expected that the first European settlers in North America quickly deemed the double-crested cormorant a competitor for fishing stock and undertook a relentless drive to destroy the birds. This enormously important book explores the roots of human-cormorant conflicts, dispels myths about the birds, and offers the first comprehensive assessment of the policies that have been developed to manage the double-crested cormorant in the twenty-first century.

Conservation biologist Linda Wires provides a unique synthesis of the cultural, historical, scientific, and political elements of the cormorant’s story. She discusses the amazing late-twentieth-century population recovery, aided by protection policies and environment conservation, but also the subsequent U.S. federal policies under which hundreds of thousands of the birds have been killed. In a critique of the science, management, and ethics underlying the double-crested cormorant’s treatment today, Wires exposes “management” as a euphemism for persecution and shows that the current strategies of aggressive predator control are outdated and unsupported by science.

Praise For The Double-Crested Cormorant: Plight of a Feathered Pariah…

'Combining natural history, policy analysis and rhapsodic appreciation, [Wires has] produced a book in which context matters for animals as much as it does for people. She would like us to see the whole bird – biologically, historically, culturally – and to understand the way ancient animosities can influence modern environmental policy.' —Jonathan Rosen, London Review of Books
— Jonathan Rosen

“The Double-Crested Cormorant is extremely important given the unprecedented nature of the history of the management of this species and its ramifications to the way we manage wildlife and respond to those apex predators we see as competitors. It is also a rare treatment that places human society as much under the magnifying glass as the bird itself.”—Keith Hobson, Environment Canada
— Keith Hobson

“Linda Wires’s brilliant documentation of the oft-maligned cormorant carries the reader to an unsuspected place, an intersection of the cormorant’s and our own worlds, where anyone can rethink his or her relationship with another species. Wonderful illustrations and definitive prose combine to lure the reader deep into the cormorant’s complicated life.”—John Marzluff, co-author of The Gifts of the Crow; Dog Days, Raven Nights; and In the Company of Crows and Ravens
— John Marzluff

“This is an important work, a benchmark popular study of a bird species that needs enlightened help in order to survive. The Double-Crested Cormorant: Plight of a Feathered Pariah ought to be for sale in the gift shops of every national park in the United States at the very least – and from the sound of Wires’s conclusions, several copies sent to Congress might help too.”—Steve Donohue, Open Letters Monthly
— Steve Donohue

“I think this [will] be an important book and [will] make a significant contribution to the several fields that it covers.”—Ian Nisbet, co-author of Terns
— Ian Nisbet

“In The Double-Crested Cormorant, Wires gets us a little bit closer to seeing the cormorant as a creature that is not a winged manifestation of our own fears, but simply a bird.”—Ingrid Satelmajer, The Los Angeles Review of Books
— Ingrid Satelmajer

Linda Wires is a conservation biologist who focuses on monitoring and issues involving waterbirds. She lives in Minneapolis. Barry Kent MacKay is a bird artist, illustrator, and activist who lives in Markham, Ontario, Canada.
Loading...
or
Not Currently Available for Direct Purchase