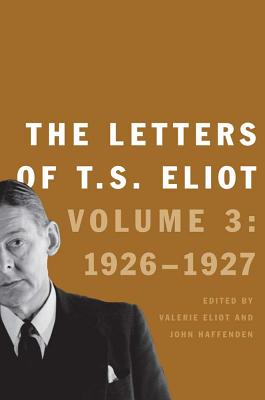 In the period covered by this richly detailed collection, T. S. Eliot was to set a new course for his life and work. The demands of his professional life as writer and editor became more complex and exacting. The celebrated but financially pressed periodical he had been editing since 1922—The Criterion: A Literary Review—switched between being a quarterly and a monthly; in addition to writing numerous essays and editorials, lectures, reviews, introductions and prefaces, his letters show Eliot involving himself wholeheartedly in the business of his new career as a publisher.

This correspondence with friends and mentors vividly documents all the stages of Eliot’s personal and artistic transformation during these crucial years, the continuing anxieties of his private life, and the forging of his public reputation.

“This volume of Eliot’s correspondence is prodigious in all things, not least intellect, beauty, personality, and size. . . . The biggest draw, of course, is the poet’s extensive correspondence with intellectuals of the time, including Ezra Pound, Wyndham Lewis, Marianne Moore, Virginia Woolf, Robert Graves, Bertrand Russell, and Jean Cocteau.”—Publishers Weekly
— Publishers Weekly

“These chunky tomes of his correspondence allow us to follow day by day, drop by harrowing drop, Eliot’s ‘rudely forced’ metamorphosis into the poet of hysteria whose sufferings enabled him, like Dostoevsky, to find ‘the entrance to a genuine and personal universe.’”—Mark Ford, New York Review of Books
— New York Review of Books

“The third volume of T.S. Eliot’s letters shows the poet and critic in a period of transition . . . The ongoing publication of the letters should be a cause for scholarly celebration . . . [The editor] has done a masterful job, setting the standard for collections of literary letters.”—Matthew Walther, Washington Times
— Matthew Walther

“[A] rich and interesting volume . . . reveal[s] with honesty and a striking fragility the emotions and thoughts of a writer who worked long and hard to keep up a persona that was defined by its reticence . . . The letters are a watershed moment . . . they reveal so much.”—Craig Woelfel, American Book Review
— Craig Woelfel

Valerie Eliot (1926-2012), née Esmé Valerie Fletcher, was the second wife of T. S. Eliot. As his widow she co-edited three previous volumes of his letters and sponsored the annual T. S. Eliot Prize. John Haffenden is emeritus professor of English literature at the University of Sheffield, senior research fellow of the Institute of English Studies, University of London, and a fellow of the British Academy.