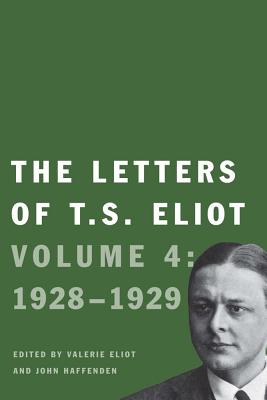 T. S. Eliot writes the letters contained in this volume during a period of weighty responsibilities as husband and increasing demands as editor and publisher. He cultivates the support of prominent guarantors to secure the future of his periodical, The Monthly Criterion, even as he loyally looks after his wife, Vivien, now home after months in a French psychiatric hospital.

Eliot corresponds with writers throughout Great Britain, Europe, and the United States while also forging links with the foremost reviews in London, Berlin, Paris, Madrid, and Milan. He generously promotes many other writers, among them Louis Zukofsky and Edward Dahlberg, and manages to complete a variety of writings himself, including the much-loved poem A Song for Simeon, a brilliant introduction to Wilkie Collins’s The Moonstone, and many more.

Valerie Eliot (1926-2012), née Esmé Valerie Fletcher, was the second wife of T. S. Eliot. As his widow she co-edited three previous volumes of his letters and sponsored the annual T. S. Eliot Prize. John Haffenden is emeritus professor of English literature at the University of Sheffield and senior research fellow of the Institute of English Studies, University of London. He was general editor of volumes 1,2, and 3 of The Letters of T. S. Eliot.