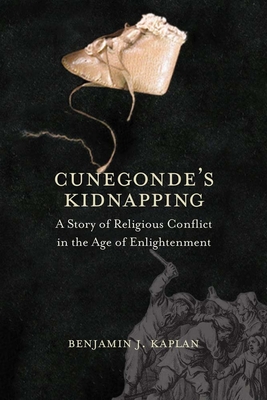 How a popular religious war erupted on the Dutch-German border, despite the ideals of religious tolerance proclaimed by the Enlightenment

In a remote village on the Dutch-German border, a young Catholic woman named Cunegonde tries to kidnap a baby to prevent it from being baptized in a Protestant church. When she is arrested, fellow Catholics stage an armed raid to free her from detention. These dramatic events of 1762 triggered a cycle of violence, starting a kind of religious war in the village and its surrounding region. Contradicting our current understanding, this war erupted at the height of the Age of Enlightenment, famous for its religious toleration.

Cunegonde’s Kidnapping tells in vivid detail the story of this hitherto unknown conflict. Drawing characters, scenes, and dialogue straight from a body of exceptional primary sources, it is the first microhistorical study of religious conflict and toleration in early modern Europe. In it, award-winning historian Benjamin J. Kaplan explores the dilemmas of interfaith marriage and the special character of religious life in a borderland, where religious dissenters enjoy unique freedoms. He also challenges assumptions about the impact of Enlightenment thought and suggests that, on a popular level, some parts of eighteenth-century Europe may not have witnessed a “rise of toleration.”

Benjamin J. Kaplan holds the chair in Dutch history at University College London and is the author of several prize-winning books. He lives in London.

Praise For Cunegonde's Kidnapping: A Story of Religious Conflict in the Age of Enlightenment (The Lewis Walpole Series in Eighteenth-Century Culture and History)…

“Kaplan paints a lucid, fascinating picture of the Enlightenment as an age of prejudice as much as toleration.”—Martin Wolf, Financial Times
— Martin Wolf

“In this compelling microhistory, Benjamin Kaplan shows that religious intolerance was by no means dead during the supposedly Enlightened century.  Based on a huge cache of judicial sources, this book paints a lively portrait of a small community enmeshed within its geographical and historical context. Readers will be drawn into a drama involving real people, thoughtfully portrayed.”—H. C. Erik Midelfort, University of Virginia
— H.C. Erik Midelfort

"In this illuminating book, Benjamin Kaplan not only tells a terrific story but expertly leads us through the intricacies of early modern religious-mixing and border-crossing.  His particular rich and evocative account goes far toward reshaping the bigger image of a religiously enlightened Europe."—Craig Harline, author of Conversions: Two Family Stories from the Reformation and Modern America
— Craig Harline

"Ben Kaplan treats us here to a fascinating thriller in which the reader is invited to participate in the jury. This exciting story at the interface of law, theology, geography, and anthropology is both a Who’s done what? and a deep-layered study of religious diversity and strife in the so-called age of enlightenment and toleration."—Bas de Gaay Fortman, Utrecht University
— Bas de Gaay Fortman

"This is more than an engrossing and beautifully written microhistory: it is also one of the most revealing windows into the complexities of faith in the early modern era that one could hope to find.  If God is in the details, then this book deserves to be called divine. Benjamin Kaplan makes a major contribution once again to our understanding of the arduous twisting path that Western culture traversed before it embraced religious tolerance."—Carlos Eire, Yale University
— Carlos Eire

“A surprising and comprehensive history of an isolated event . . . that throws light on the progress of the Enlightenment or lack thereof, and on human nature itself. . . . [An] absorbing story.”—Rob Hardy, Dispatch (Columbus, Mississippi)
— Rob Hardy

"Benjamin Kaplan writes marvelously well and his lively and revealing study should be another prize-winner and a book that reaches many readers."—Natalie Zemon Davis, author of Women on the Margins
— Natalie Zemon Davis

“In this exemplary microhistory . . . Kaplan has provided us with a fascinating view of eighteenth-century religious and social history.”—Michael Printy, Catholic Historical Review
— Michael Printy
or
Not Currently Available for Direct Purchase
Copyright © 2020 American Booksellers Association