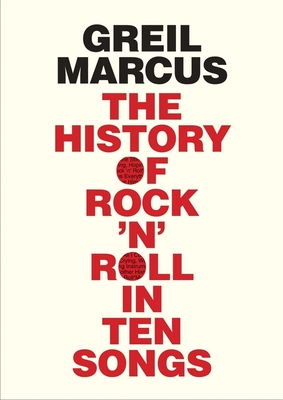 The History of Rock 'n' Roll in Ten Songs

Unlike all previous versions of rock ’n’ roll history, this book omits almost every iconic performer and ignores the storied events and turning points that everyone knows. Instead, in a daring stroke, Greil Marcus selects ten songs recorded between 1956 and 2008, then proceeds to dramatize how each embodies rock ’n’ roll as a thing in itself, in the story it tells, inhabits, and acts out—a new language, something new under the sun.

“Transmission” by Joy Division. “All I Could Do Was Cry” by Etta James and then Beyoncé. “To Know Him Is to Love Him,” first by the Teddy Bears and almost half a century later by Amy Winehouse. In Marcus’s hands these and other songs tell the story of the music, which is, at bottom, the story of the desire for freedom in all its unruly and liberating glory. Slipping the constraints of chronology, Marcus braids together past and present, holding up to the light the ways that these striking songs fall through time and circumstance, gaining momentum and meaning, astonishing us by upending our presumptions and prejudices. This book, by a founder of contemporary rock criticism—and its most gifted and incisive practitioner—is destined to become an enduring classic.

Praise For The History of Rock 'n' Roll in Ten Songs…

"This could be Marcus’ most inviting book: Emotion paces erudition, and the present gets to ride shotgun with the past, real and imagined."—Will Hermes, Rolling Stone

"Marcus is our greatest cultural critic, not only because of what he says but also, as with rock-and-roll itself, how he says it."—David Kirby, The Washington Post

"In his new book, which is surely one of his best and most beautifully written, Marcus revisits ten songs, recorded during the last sixty years, some of them long forgotten, in order to capture the pulsating and powerful language of rock 'n' roll. . . . The book, I am certain, will compel readers to return to the songs Marcus has anointed, and to others. Even if they have heard them before, they will listen to them as if for the first time."—Glenn C. Altschuler, The Huffington Post

"Marcus, of course, is one of the epic figures in rock writing. . . . Like so many of Marcus’s previous books, The History of Rock ‘n’ Roll in Ten Songs often feels like a tone poem or perhaps a written embodiment of the cultural memory.  He flows through the songs and musicians he loves as if creating a waking dream crowded with the stars of rock history."—Touré, The New York Times Book Review

"For Marcus, every great song is a Rosetta Stone, an esoteric code. This approach gives him great imaginative, literary breadth. . . . Out of Marcus’ dozen or so books, Ten Songs is the purest distillation of his ideas. . . . The chapters on Joy Division, on Buddy Holly, and on the two ‘Money' songs are tours de force."—Carl Wilson, Slate

"True musos need little introduction to Marcus, whose meditations on the rock and pop canon have delighted many. . . . Here, he is at his most ambitious and obtuse, defying the obvious choices to map an alternative history of popular music."—Louis Wise, The Sunday Times

"No writer puts you inside the experience of music the way Greil Marcus does. His descriptions of songs, especially, unfold like thrillers or romantic rhapsodies, sucking you in and revealing aspects of each beat or vocal trill that you'd never have noticed on your own. As the most esteemed music writer of his generation, Marcus has made a career of challenging conventional wisdom on everything from Elvis to punk to Bob Dylan's Basement Tapes. . . . It's so much fun to let him drag your brain onto the dance floor."—Ann Powers, NPR.com

"Try telling a teenager who’s just heard ‘Black Dog’ for the first time that rock ’n’ roll is dead. Marcus knows it’s not. He maps recordings, re-recordings, and performances as if they’re veins belonging to the same body, warm and breathing and very much alive."—Lara Zarum, Bookforum.com

"Marcus rambles the back roads of rock history in this inventive and entertaining collection of short biographies of 10 songs spanning the entire breadth of rock-and-roll, from doo-wop to post-punk, demonstrating how rock's impulse to combine (and recombine) its influences made each possible and entirely original."—Jon Foro, from  Amazon’s Big Fall Books Preview, an Editor’s Pick

"Marcus ingeniously retells the tale of rock and roll as the undulating movement of one song through the decades, speaking anew in different settings. . . . Marcus brilliantly illustrates what many rock music fans suspected all along but what many rock critics have failed to say: rock ’n’ roll is a universal language that transcends time and space and reveals all mysteries and truths."—Publishers Weekly, Starred Review

"Marcus is a great prose stylist, fun to read even when he’s spinning his wheels, and often— there’s no telling when—he will pick up speed and zoom off into unexpected territories."—Evan Kindley, The Los Angeles Times

"Cultural critic Greil Marcus' new book, The History of Rock 'n' Roll in Ten Songs, goes beyond a simple list of tunes that define a genre. Marcus uses each of the songs as a jumping off point to write about an era, a time, place or emotion, and that's the least of it."—Leah Garchik, The San Francisco Chronicle

"Marcus springs free of linearity and chases associations across decades and from music to books, movies and other art forms that ‘at once raise the question of what rock 'n' roll is and answer it.’ . . . Marcus is, at his best, the music critic equivalent of Gore Vidal when Vidal was also at his best: an essayist whose digressions are as intriguing as his main points and who almost always connects the former to the latter."—Jon M. Gilbertson, Milwaukee Journal Sentinel

"Greil Marcus hears things no one else hears. He translates fleeting moments of sound into historical fantasy, extrapolating poetry from what may have been just another day in a recording studio. . . .  It may take longer to read Marcus’s dissection of a two-minute pop song than it does to listen to the source material, but it’s often worth it."—Michael Barclay, Maclean’s

"The History of Rock 'n' Roll isn't a rational or defensible history of rock 'n' roll. That's the point. The narrative fluctuates according to every listener's unique experience."—Sam Lefebvre, East Bay Express

"Another allusive, entertaining inquiry by veteran musicologist Marcus. . . . [He] does what he does best: make us feel smarter about what we’re putting into our ears."—Kirkus, starred review

Winner of the 2015 Deems Taylor Virgil Thomson Award in Music Criticism, given by the American Society of Composers, Authors & Publishers

"You could go to the Rock and Roll Hall of Fame and take in the artifacts and roll call or you can read Greil Marcus’ kinetic, pulsing, brilliant history of this deeply American art form, The History of Rock ‘N’ Roll in Ten Songs. From his choice of which ten songs to explore to his invention of a kind of a listener’s lexicon—a new way of bending sound to language—Marcus captures why Rock and Roll resonates down to our bones."—Walter Mosley

"When I was 18 and leaving home for college, my brother put one thing in my hand: a copy of Greil Marcus's Mystery Train. It changed my life. More than 20 years have passed, and he's still the Don, still connecting caves. He's as good on Beyoncé in this new book as he was on Harmonica Frank back then, but the range of associations is wider, the mind making them deeper, and the deceptively jazzy precision of his prose sharper. He's a treasure."—John Jeremiah Sullivan

"A great essay begins with a theme and then makes it fly. Greil Marcus can make it soar.  In The History of Rock ‘n’ Roll in Ten Songs he does just that. He says of Amy Winehouse that she could unlock a song. Marcus unlocks rock ‘n’ roll history to find more than you ever thought might be there."—Jenny Diski

"I first heard Elvis in early 1956 in a school corridor in Norfolk, England. I knew something profound had happened. Where was Greil Marcus back in those Dark Ages to explain to me what was going on? He knows everything and tells an electrifying story."—Stephen Frears

"Like Leslie Fiedler, Greil Marcus is a critic for the ages. There aren’t many writers I’ve learned more from, nor many whose word for word and sentence for sentence writing I enjoy more. The History of Rock ‘n’ Roll in Ten Songs is among his richest work, perhaps his most heartfelt.  Like Mystery Train, it’s something we will be learning from, that will give us new ways to think about the sounds that have filled the worlds around us and the worlds inside us, for years to come."—Mikal Gilmore

Greil Marcus lives in Oakland, CA. His books include Mystery Train: Images of America in Rock ’n’ Roll Music and Lipstick Traces: A Secret History of the Twentieth Century.