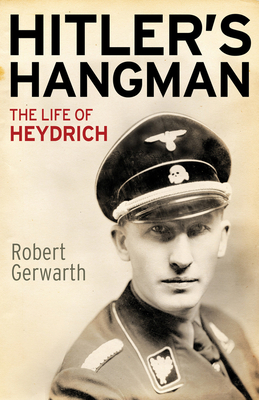 The Life of Heydrich

A chilling biography of the head of Nazi Germany’s terror apparatus, Reinhard Heydrich—a key player in the Third Reich whose full story has never before been told

“Gerwarth dispassionately examines Heydrich’s rise and assassination, which resulted in a horrific series of Nazi reprisals in Czechoslovakia. The best account of Heydrich.”—Jacob Heilbrunn, The Daily Beast

“Meticulously takes us inside the Third Reich, . . . revealing as few texts do how the bureaucracy of evil worked.”—Kirkus Reviews

Reinhard Heydrich is widely recognized as one of the great iconic villains of the twentieth century, an appalling figure even within the context of the Nazi leadership. Chief of the Nazi Criminal Police, the SS Security Service, and the Gestapo, ruthless overlord of Nazi-occupied Bohemia and Moravia, and leading planner of the "Final Solution," Heydrich played a central role in Hitler's Germany. He shouldered a major share of responsibility for some of the worst Nazi atrocities, and up to his assassination in Prague in 1942, he was widely seen as one of the most dangerous men in Nazi Germany. Yet Heydrich has received remarkably modest attention in the extensive literature of the Third Reich.


Robert Gerwarth weaves together little-known stories of Heydrich's private life with his deeds as head of the Nazi Reich Security Main Office. Fully exploring Heydrich's progression from a privileged middle-class youth to a rapacious mass murderer, Gerwarth sheds new light on the complexity of Heydrich's adult character, his motivations, the incremental steps that led to unimaginable atrocities, and the consequences of his murderous efforts toward re-creating the entire ethnic makeup of Europe.


Praise For Hitler's Hangman: The Life of Heydrich…

"This admirable biography makes plausible what actually happened and makes human what we might prefer to dismiss as monstrous."—Timothy Snyder, Wall Street Journal

"Gerwarth’s approach is subtle, painstaking and psychologically acute; it convincingly demonstrates that the historian’s tool of 'cold empathy' best clarifies the enduring question of what brings forth monsters."—Roy Foster, Times Literary Supplement (Books of the Year)

"Hitler’s Hangman: The Life of Heydrich by Robert Gerwarth is superb on the making of evil."—Frank Dikotter, The Daily Telegraph (Books of the Year)

"At the subsequent grand public funeral, Nazi leaders eulogized Heydrich as the perfect Nazi. This intelligent and readable biography shows how he had made himself into one, and Gerwarth explains persuasively what motivated Heydrich to do so."—Richard J. Evans, Times Higher Education

". . . two splendid biographies. There have been lives written before, but nothing to match the exceptional way that Peter Longerich and Robert Gerwarth . . . have gone about digging in the sources to root these two awful figures more firmly in the context that gave rise to some of the worst crimes of the modern age. It is unlikely that either of these biographies will be bettered."—Richard Overy, The Sunday Telegraph (reviewed with 'Heinrich Himmler: A Life' by Peter Longerich)

"An excellent inquiry into one of Hitler’s most fearsome paladins, the aide to Heinrich Himmler who played a key role in implementing the Holocaust. Gerwarth dispassionately examines Heydrich’s rise and assassination, which resulted in a horrific series of Nazi reprisals in Czechoslovakia. The best account of Heydrich."—Jacob Heilbrunn, The Daily Beast

"[A] probing biography. . . . Gerwarth’s fine study shows in chilling detail how genocide emerged from the practicalities of implementing a demented belief system."—Publishers Weekly

"[M]eticulously takes us inside the Third Reich, face to face with the Nazi hero, revealing as few texts do how the bureaucracy of evil worked."—Kirkus Reviews

"Gerwarth . . . offers a first rate biography of one of history’s most notorious villains."—Deseret News

"Gerwarth's mastery of primary sources and relevant secondary literature is impressive, and his integration of the most recent scholarship and historiographical perspectives on the Nazi dictatorship and the Holocaust make this fine biography even more compelling. An outstanding, exceptional book sure to become the standard account of one of the most infamous Nazi war criminals."—D.R. Snyder, Choice

"Drawing on profound research, Robert Gerwarth presents a penetrating, authoritative analysis of the ruthless personality and murderous career of the man who directed the Third Reich's police state and became a driving-force in the programme to exterminate Europe's Jews."—Ian Kershaw, author of Hitler

"Evil is a word used too lightly in our times and in historical review. Yet, in his splendid biography of Heydrich, Robert Gerwarth allows us to see what evil means in its subtlety and complexity, its seeming reasonableness on occasion, its starkness and its terror. Reading Hitler's Hangman makes plain why, in our eternal wrestling with the question where by the grace of God might we be going, historical reckoning, even for the most appalling of war criminals, is a more satisfactory and richer approach than is legal prosecution."—R.J.B. Bosworth, author of Mussolini

"An excellent book on a major figure in the Nazi dictatorship, its secret police and the Holocaust. Gerwarth’s illumination of the development of the security complex under Heydrich, his actions in the Protectorate, and especially the war in the East, is of real value."—Tim Kirk, author of Nazi Germany

Robert Gerwarth is professor of modern history at University College Dublin and director of UCD’s Centre for War Studies.
Loading...
or support indie stores by buying on
(This book is on backorder)