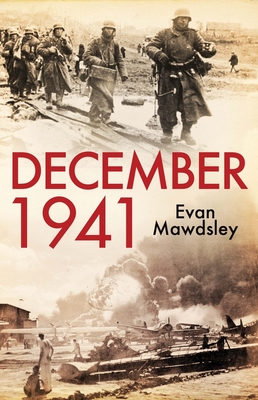 An account of twelve pivotal days in 1941, when a chain of interlinked events changed world history

In far-flung locations around the globe, an unparalleled sequence of international events took place between December 1 and December 12, 1941. In this riveting book, historian Evan Mawdsley explores how the story unfolded. He demonstrates how these dramatic events marked a turning point not only in the course of World War II but also in the direction of the entire century.

On Monday, December 1, 1941, the Japanese government made its final decision to attack Britain and America. In the following days, the Red Army launched a counterthrust in Moscow while the Japanese bombed Pearl Harbor and invaded Malaya. By December 12, Hitler had declared war on the United States, the collapse of British forces in Malaya had begun, and Hitler had secretly laid out his policy of genocide. Churchill was leaving London to meet Roosevelt as Anthony Eden arrived in Russia to discuss the postwar world with Stalin. Combined, these occurrences brought about a "new war," as Churchill put it, with Japan and America deeply involved and Russia resurgent. This book, a truly international history, examines the momentous happenings of December 1941 from a variety of perspectives. It shows that their significance is clearly understood only when they are viewed together.


Praise For December 1941: Twelve Days that Began a World War…

“Evan Mawdsley’s December 1941 marks the change from a continental war into a global war in an original and interesting way.”—Antony Beevor, Sunday Telegraph Seven (Books of the Year)
— Antony Beevor

"Suspenseful. . . Mawdsley embarks on the action from the first day and never lets up in this crisp, chronological study. . . . A rigorous, sharp survey of this decisive moment in the war."—Kirkus Reviews
— Kirkus Reviews

"This book is a ‘must read’ for anyone with an interest in the history of the Second World War.”—Jonathon Eaton, Military History
— Jonathon Eaton

‘Mawdsley’s grasp of the complexities of military operations and grand strategy is second to none. Weaving together the national strands of this global story in a compelling narrative, he underscores just how crucial that first week of 1941 was.’ - Joe Maiolo, author of Cry Havoc: Arms Races and the Second World War
— Joe Maiolo

'Using a zoom lens, Evan Mawdsley captures the realities of the dramatic twelve days in 1941 that determined the fate of the world. He shows how the campaigns in the Atlantic, North Africa, the Soviet Union and the Far East suddenly merged into a global war. He demonstrates how these momentous events presaged the defeat of Hitler and of Japan, the downfall of the British empire, and the rise of the two superpowers that dominated the history of the world between 1945 and 1989. Vividly written, based on a wealth of sources, and illuminated by penetrating and judicious insights, this is a pioneering work of international history that will enthrall scholars and general readers alike.' - Bernard Wasserstein, author of Barbarism and Civilization: A History of Europe in Our Time
— Bernard Wasserstein

‘The drama of the events leading to the outbreak of global war in December 1941 has never been better captured. Mawdsley’s evocation of the personalities and issues is masterly and his command of the sources authoritative. His pacey and engaging narrative will appeal to everyone interested in the history of the Second World War.’ - Geoffrey Roberts, author of Stalin's Wars: From World War to Cold War, 1939-1953
— Geoffrey Roberts

“His book presents a radically new approach to our study of the Second World War through a microscopic analysis of the events which took place between 1 and 12 December 1941......This is a fascinating treatment of a crucial phase of the conflict. He switches with ease between the different theatres of the conflict, taking the reader from Churchill’s deliberations at Chequers to the horrors of warfare on the Eastern Front. This book is a ‘must read’ for anyone with an interest in the history of the Second World War.”—Jonathon Eaton, Military History
— Jonathon Eaton

"Suspenseful ...Mawdsley embarks on the action from the first day and never lets up in this crisp, chronological study...Mawdsley has an excellent grip on the behind-the-scenes political and diplomatic scurrying among London, Washington, Berlin and Tokyo...A rigorous, sharp survey of this decisive moment in the war."—Kirkus Reviews
— Kirkus Reviews

'All of these cataclysmic events have long been pored over by historians...It would, one might have thought, be difficult for anyone to find a new way across such familiar terrain. Yet in December 1941, retired Glasgow University Professor Evan Mawdsley does just that... Not only does he construct an engrossing day-by-day narrative, but it is one that shows quite clearly how closely all of these epochal changes were interlinked.' - The Scotsman
— David Robinson

'An account of naval and army operations that is fresh and vivid…Mawdsley's account is authoritative, invigorated by new perspectives and contextualised in great themes: the end of empires, the dawn of American might and the struggle for supremacy in Southeast Asia.'—Times Higher Education
— Times Higher Education

"Mawdsley has captured the very essence of an almost unique phase of the war… The engaging manner in which [he] has written the book will appeal to a wide range of reader as he successfully makes the characters and events present themselves in all their glory… This is an extremely well written book that will captivate the reader and provide them with a much greater understanding of the Second World War."—Leslie J. M. Obre, History Teaching Review
— Leslie J.M. Obre

"Honing in on the pivotal month that ushered America into the Second World War, this meticulous history gives a gripping account of the days in which the entire world held its breath."—Benjamin Evans, The Sunday Telegraph
— Benjamin Evans

"When did not just the Second World War, but our postwar condition, truly begin? This compelling history, tight in focus but vast in implication, traces the events of 1-12 December 1941… Mawdsley is a compelling guide to a pivotal fortnight." —Boyd Tonkin, Independent i
— Boyd Tonkin

Evan Mawdsley is honorary professorial research fellow, School of Humanities, University of Glasgow. His many books include World War II: A New History; Thunder in the East: The Nazi-Soviet Struggle, 1941–1945; and The Russian Civil War. He lives in Glasgow.
Loading...
or
Not Currently Available for Direct Purchase