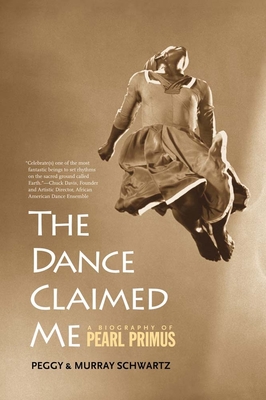 The Dance Claimed Me (Paperback)

A Biography of Pearl Primus

The first full-scale biography of the seminal dancer, anthropologist, and educator

Pearl Primus (1919-1994) blazed onto the dance scene in 1943 with stunning works that incorporated social and racial protest into their dance aesthetic. In The Dance Claimed Me, Peggy and Murray Schwartz, friends and colleagues of Primus, offer an intimate perspective on her life and explore her influences on American culture, dance, and education. They trace Primus's path from her childhood in Port of Spain, Trinidad, through her rise as an influential international dancer, an early member of the New Dance Group (whose motto was "Dance is a weapon"), and a pioneer in dance anthropology.

Primus traveled extensively in the United States, Europe, Israel, the Caribbean, and Africa, and she played an important role in presenting authentic African dance to American audiences. She engendered controversy in both her private and professional lives, marrying a white Jewish man during a time of segregation and challenging black intellectuals who opposed the "primitive" in her choreography. Her political protests and mixed-race tours in the South triggered an FBI investigation, even as she was celebrated by dance critics and by contemporaries like Langston Hughes.

For The Dance Claimed Me, the Schwartzes interviewed more than a hundred of Primus's family members, friends, and fellow artists, as well as other individuals to create a vivid portrayal of a life filled with passion, drama, determination, fearlessness, and brilliance.

Praise For The Dance Claimed Me: A Biography of Pearl Primus…

"[A]n informal, intimate, yet scholarly biography of Primus . . . This is an excellent source for those interested in American and African American studies, women's studies, and, of course, American modern dance, dance anthropology, and dance education."—C.T. Bond, Choice
— C.T. Bond

"In The Dance Claimed Me, we see Pearl Primus dancing a dance performed only by Watusi men. We see her electrifying performance at the first Negro rally at Madison Square Garden in New York City, where she became moon and prayer. Rain. Thunder. Light on the world stage. We feel the pulse of this twentieth century African-American woman claiming the dance of her people for all people and we chant Amen. Amen. A woman. A woman."—Sonia Sanchez, author of Morning Haiku
— Sonia Sanchez

"The Dance Claimed Me is at once an invaluable contribution to the cultural history of American dance as well as a scintillating account of an extraordinary life. As dancer, a force majeure; as choreographer, a culturally groundbreaking and influential innovator; as devotee and tireless teacher of traditional African cultural values, Mama Pearl Primus was the embodiment of black consciousness and womanhood at its very best.  All of which emerges powerfully from these pages.”—Ekwueme Michael Thelwell, author of The Harder They Come

"Peggy and Murray have taken the great, complicated life and legacy of Pearl Primus and given us a way to learn, breathe and feel Pearl's life journey. It reads like a mystery novel, turning and churning at unexpected moments. Dance scholars, African American historians and lovers of dance will all inhale this book."--Jawole Willa Jo Zollar, Founder and Artistic Director of Urban Bush Women

"Pearl Primus was a cauldron of creativity. When she danced she allowed us to share her soul. Peggy and Murray Schwartz celebrate one of the most fantastic beings to set rhythms on the sacred ground called Earth."--Chuck Davis, Founder and Artistic Director of the African American Dance Ensemble

"Peggy and Murray Schwartz have written a bold biography of one of the most important figures in American dance. Pearl Primus almost single-handedly lifted African dance to the American stage and gave the world her magic in a daring creativity sustained by a sheer love of movement. This book should be read by anyone seeking to understand modern dance traditions."--Molefi Kete Asante, author of The History of Africa: The Quest for Eternal Harmony

"The authors soar as they extrapolate and define the many complex parts of Pearl Primus. Their research is exhaustive and comprehensive. The reader is pulled into her dynamic world and given a front row seat to one of her many mesmerising performances."—Dr. Glenville Ashby, Trinidad Guardian
— Dr. Glenville Ashby

Read an interview with Peggy and Murray Schwartz on the Yale Press Log.
— http://goo.gl/gOPMVX

"A revelation of one woman’s life, a celebration of Black beauty, and a pleasure to read, The Dance Claimed Me is required reading for anyone interested in one 20th century Black woman trailblazer’s story."—Eisa Nefertari Ulen, The Crisis
— Eisa Nefertari Ulen

"[This] biography reflects honest but compassionate insight into a towering artist who was not always easy to understand or work with. The Dance Claimed Me ably portrays Primus and the times and experiences that molded her—from racism and Red-baiting in America to a life-transforming, if sometimes unreliably welcoming, Africa. Regal, headstrong and as complex as only a driven genius can be, Primus can be credited with infusing the American dance stage with the profundities and subtleties of African ritual dance and music, influential if impossible to duplicate to perfection. I recommend this engrossing, poignant study of her life and contributions."—Eva Yaa Asantewaa, InfiniteBody Blog
— InfiniteBody blog

"The authors. . . create vivid descriptions of [Primus's] performances, and illuminate her pioneering work in merging African dance with modern dance innovation;  they explore her charming but difficult personality with tact and grace. . . The photo section is particularly resonant:  Primus in her prime, charisma and virtuosity shining through."—Judith Flanders, Times Literary Supplement
— Judith Flanders

"The Dance Claimed Me captures the myriad experiences of an exceptional artist whose impact on the world of art and culture far exceeds the attention dance history scholars have given her prior to this book's publication....The reader is drawn into the evolving dynamics shaping the social, political, and aesthetic life of America and the world. Part of the book's overall achievement is that it shows, in brilliant detail, how so many of these changes were embodied in the life and art of Pearl Primus."—John Perpener III, Dance Chronicle
— John Perpener III

"Peggy and Murray Schwartz' loving biography… is informed by some 15 years of close friendship with Pearl in her later years, and brings to life her boldness, her complexity, and her passion." Bill Harpe, Dancing Times
— Bill Harpe

"An extraordinary life story, told by Peggy and Murray Schwartz in a biography that warms the heart, lifts the spirit, and stimulates the mind."—Bill Harpe, Dancing Times
— Bill Harpe

"The Dance Claimed Me is a highly personal biography, and the authors reveal, in their introduction and elsewhere in the book, the nature of their close relationship to the choreographer. One can sense the deep love that guides the writers as they set out to tell the story of Primus's life. The Dance Claimed Me brings Pearl Primus to life, revealing multiple dimensions of her world to new audiences."—Dance Research Journal
— Dance Research Journal

"As much a labour of love as it is a recovery project, The Dance Claimed Me communicates the Schwartzs’ sincere investment in securing Primus’s place in concert dance and US cultural history.…The authors strike a devotional tone that will probably resonate with many readers who admire the artist, and for whom this book represents the acknowledgement that Primus has always deserved but seldom received. There is no question that the book is an archival tour de force."—Rebekah Kowal, Performance Research
— Rebekah Kowal
or
Not Currently Available for Direct Purchase
Copyright © 2020 American Booksellers Association