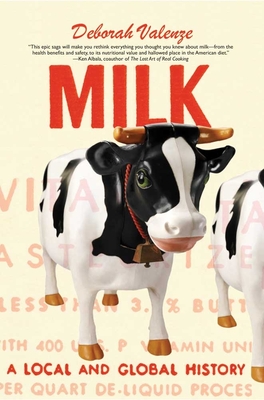 A Local and Global History

A historian reveals the illuminating history of milk, from ancient myth to modern grocery store

How did an animal product that spoils easily, carries disease, and causes digestive trouble for many of its consumers become a near-universal symbol of modern nutrition? In the first cultural history of milk, historian Deborah Valenze traces the rituals and beliefs that have governed milk production and consumption since its use in the earliest societies.

Covering the long span of human history, Milk reveals how developments in technology, public health, and nutritional science made this once-rare elixir a modern-day staple. The book looks at the religious meanings of milk, along with its association with pastoral life, which made it an object of mystery and suspicion during medieval times and the Renaissance. As early modern societies refined agricultural techniques, cow's milk became crucial to improving diets and economies, launching milk production and consumption into a more modern phase. Yet as business and science transformed the product in the nineteenth and twentieth centuries, commercial milk became not only a common and widely available commodity but also a source of uncertainty when used in place of human breast milk for infant feeding. Valenze also examines the dairy culture of the developing world, looking at the example of India, currently the world's largest milk producer.

Ultimately, milk's surprising history teaches us how to think about our relationship to food in the present, as well as in the past. It reveals that although milk is a product of nature, it has always been an artifact of culture.

Deborah Valenze is professor of history at Barnard College. She lives in Cambridge, MA.

Praise For Milk: A Local and Global History…

"[A] serious work of history with great illustrations."—Marion Nestle, The Atlantic

“Valenze’s book is an engagingly written and well-researched foray into a huge territory, pulling a mass of material into sharp focus and revealing milk as both strange and familiar.”—Nicola Humber, Times Higher Education
— Nicola Humber

“[C]omprehensive… covers everything from milk's role in mythology to its effects on animal husbandry to its transformation into cheese.”—Catherine Price, Slate

"A well-written, engaging, wry history of milk. No other book covers the territory in quite the same way."—Amy Bentley, New York University

"Milk is the place to go to begin understanding how we got from dairy maids to industrial milk production and current debates about the value of raw."—Marion Nestle, Paulette Goddard Professor of Nutrition, NYU; author of Food Politics and What to Eat

"Milk is too rich to skim. From Hinduism’s sacred Cow of Plenty through Mongol mare’s milk to the western world’s 'cow love' and industrial milk production, Deborah Valenze’s history is always engrossing and satisfying."—Elizabeth Abbott, author of Sugar: A Bittersweet History

"Simple, wholesome, daily fare? This epic saga will make you rethink everything you thought you knew about milk – from the health benefits and safety, to its nutritional value and hallowed place in the American diet. This is an enourmous gulp of a history, traversing many centuries and the myriad of attitudes toward milk that could not possibly be more different than our own."—Ken Albala, Co-Author of The Lost Art of Real Cooking
— Ken Albala

"From Ancient Egyptian cow-god worshippers and breastfeeding saints to the expansion of milk-drinking in Asia today, Valenze brings together a world history of cultures and personalities that has elevated milk to a magic substance in the Western, and Westernized, imagination."—E. Melanie DuPuis, author of Nature's Perfect Food: How Milk Became America's Drink

“The book is detailed and engaging, with plenty of eccentric characters, from female Renaissance scholars supping with the peasants to military men fighting over condensed milk for their coffee.”—Louise Gray, The Daily Telegraph
— Louise Gray

"With scholarly precision, Valenze recounts the stories of such worthies as Gail Borden, who industrialized the production of condensed milk. She also quotes widely from historical and literary sources. Her documentation of milk’s transformation into the modern product that underpins today’s hugely diverse dairy products industry offers some insights and precedents useful in helping address current food supply concerns."—Mark Knoblauch, Booklist
— Mark Knoblauch

Won Honorable Mention for the 2011 New England Book Festival in the General Non-Fiction category. This award is given by the JM Northern Media family of festivals, and sponsored by the Larimar St. Croix Writers Colony, eDivvy, Shophanista and Westside Websites
— Honorable Mention General Nonfiction
or
Not Currently Available for Direct Purchase
Copyright © 2020 American Booksellers Association