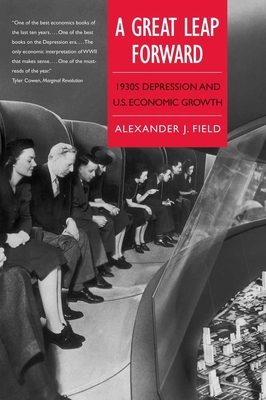 This bold re-examination of the history of U.S. economic growth is built around a novel claim, that productive capacity grew dramatically across the Depression years (1929-1941) and that this advance provided the foundation for the economic and military success of the United States during the Second World War as well as for the golden age (1948-1973) that followed.

Alexander J. Field takes a fresh look at growth data and concludes that, behind a backdrop of double-digit unemployment, the 1930s actually experienced very high rates of technological and organizational innovation, fueled by the maturing of a privately funded research and development system and the government-funded build-out of the country's surface road infrastructure. This significant new volume in the Yale Series in Economic and Financial History invites new discussion of the causes and consequences of productivity growth over the last century and a half and on our current prospects.

“Alex Field in this pathbreaking book overturns one myth after another about American economic history.  His most important contribution is to unleash the saga of American economic growth from the simplistic story that investment automatically begets growth.  He contrasts the 1920s, with high investment that ended in the collapse of a stock market bubble, with the 1930s when investment had collapsed and yet innovations continued and the world was changed forever.  The 1930s ended with foundations of the standard of living lacking 10 years earlier, including streamlined autos with automatic transmissions, a vastly expanded highway network including the Bay Area bridges and the Hoover dam, diesel railroad locomotives replacing steam, and the transcendant revolution in the motion picture industry created by the 1939 productions of "Gone With the Wind" and "The Wizard of Oz."  This book will change forever standard views of which decade's growth was most dynamic, and why.”—Robert J. Gordon, Northwestern University

“. . . adds new evidence for the productive role of public spending. It also changes our view of what happened in the American economy during the 1930s, when military investment was not a driving force.”—Fred Block, American Prospect
— Fred Block

“Field poses and attempts to answer interesting questions using straightforward number-crunching and reasoning, rather than resorting to obscure mathematics or advanced statistics. The result is a book that represents the best of what economics can be.”—Arnold Kling, The American
— Arnold Kling

“Alex Field begins his provocative new book with the proposition that beneath the misery of the Great Depression, the 1930s were in fact “the most technologically progressive decade of the century.”  This counterintuitive finding launches Field on a vigorous new interpretation of U.S. economic history in the twentieth century.  His narrative is firmly rooted in the quantitative record, yet always accessible and full of surprises.  Everyone concerned about the American economy (past and present) should read this book.”—Gavin Wright, Stanford University

“Eight decades later, the debacle of the Great Depression still fascinates many Americans – and for good reason.  Alexander Field’s new book is a major contribution to our understanding of what went wrong and what the country did to fix it.  His finding that the technology of American industry advanced unusually rapidly under the New Deal is an especially valuable corrective to a variety of views held by economists and the general public alike.”—Benjamin M. Friedman, Harvard University
— Benjamin Friedman

“As we sit mired in the The Great Recession, Alexander Field’s exciting reappraisal of The Great Depression offers surprising solace.  By showing the Great Depression was coupled with the most rapid technological advance in US history, he fundamentally recasts the history of the 1930s.  But he also offers hope that our own depression likely will have no long run costs to the US economy.”—Gregory Clark, University of California, Davis

"... makes valuable and novel contributions to our understanding of the Great Depression and the Second World War ... highly recommended..."—Jason Taylor, Journal of Economic History
— Jason Taylor

"... an exemplary demonstration of how careful and imaginative use of statistical information can revise deeply entrenched ideas about the past…. this book breaks new ground. Teachers of twentieth-century American history should read Field’s book for its totally convincing demolition of the folklore history idea that World War II was good for the American people because it ended the Great Depression and created the basis for the mass consumer prosperity that followed the war." —Ronald Edsforth, Journal of American History
— Ronald Edsforth

"According to Alexander Field in A Great Leap Forward, the 1930s were, in the aggregate, the most technologically progressive of any comparable period in U.S. economic history. . . . It requires some patience, reflection, and time to wrap one's mind around this perplexing assertion. It goes against everything historians know about the 1930s. If, by the end of Field's book, you're not convinced, you'll at least be sympathetic to the idea. Field makes that good a case."—Howard Bodenhorn, Business History Review
— Howard Bodenhorn

Selected as a 2011 Choice Outstanding Academic Title in the Economics category.

Alexander J. Field is the Michel and Mary Orradre Professor of Economics, Santa Clara University, and executive director of the Economic History Association.
Loading...
or
Not Currently Available for Direct Purchase