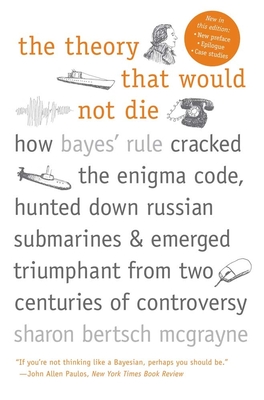 The Theory That Would Not Die

How Bayes' Rule Cracked the Enigma Code, Hunted Down Russian Submarines, and Emerged Triumphant from Two Centuries of Controversy

A New York Times Book Review Editor's Choice: A vivid account of the generations-long dispute over Bayes' rule, one of the greatest breakthroughs in the history of applied mathematics and statistics

"An intellectual romp touching on, among other topics, military ingenuity, the origins of modern epidemiology, and the theological foundation of modern mathematics."—Michael Washburn, Boston Globe

"To have crafted a page-turner out of the history of statistics is an impressive feat. If only lectures at university had been this racy."—David Robson, New Scientist

Bayes' rule appears to be a straightforward, one-line theorem: by updating our initial beliefs with objective new information, we get a new and improved belief. To its adherents, it is an elegant statement about learning from experience. To its opponents, it is subjectivity run amok.


In the first-ever account of Bayes' rule for general readers, Sharon Bertsch McGrayne explores this controversial theorem and the human obsessions surrounding it. She traces its discovery by an amateur mathematician in the 1740s through its development into roughly its modern form by French scientist Pierre Simon Laplace. She reveals why respected statisticians rendered it professionally taboo for 150 years—at the same time that practitioners relied on it to solve crises involving great uncertainty and scanty information (Alan Turing's role in breaking Germany's Enigma code during World War II), and explains how the advent of off-the-shelf computer technology in the 1980s proved to be a game-changer. Today, Bayes' rule is used everywhere from DNA de-coding to Homeland Security.

Drawing on primary source material and interviews with statisticians and other scientists, The Theory That Would Not Die is the riveting account of how a seemingly simple theorem ignited one of the greatest controversies of all time.


Praise For The Theory That Would Not Die: How Bayes' Rule Cracked the Enigma Code, Hunted Down Russian Submarines, and Emerged Triumphant from Two Centuries of Controversy…

"If you're not thinking like a Bayesian, perhaps you should be."—John Allen Paulos, New York Times Book Review

"A masterfully researched tale of human struggle and accomplishment . . . Renders perplexing mathematical debates digestible and vivid for even the most lay of audiences."—Michael Washburn, Boston Globe

"[An] engrossing study. . . . Her book is a compelling and entertaining fusion of history, theory and biography."—Ian Critchley, Sunday Times

"This account of how a once reviled theory, Baye’s rule, came to underpin modern life is both approachable and engrossing."—Sunday Times

"Makes the theory come alive . . . enjoyable . . . densely packed and engaging . . . very accessible . . . an admirable job of giving a voice to the scores of famous and non-famous people and data who contributed, for good or for worse."—Significance Magazine

"Engaging . . . Readers will be amazed at the impact that Bayes' rule has had in diverse fields, as well as by its rejection by too many statisticians. . . . I was brought up, statistically speaking, as what is called a frequentist. . . . But reading McGrayne's book has made me determined to try, once again, to master the intricacies of Bayesian statistics. I am confident that other readers will feel the same."—The Lancet

"A lively, engaging historical account. . . . McGrayne describes actuarial, business, and military uses of the Bayesian approach, including its application to settle the disputed authorship of 12 of the Federalist Papers, and its use to connect cigarette smoking and lung cancer. . . . All of this is accomplished through compelling, fast-moving prose. . . . The reader cannot help but enjoy learning about some of the more gossipy episodes and outsized personalities."—Choice

"Thorough research of the subject matter coupled with flowing prose, an impressive set of interviews with Bayesian statisticians, and an extremely engaging style in telling the personal stories of the few nonconformist heroes of the Bayesian school."—Sam Behseta, Chance

"A fascinating and engaging tale."—Mathematical Association of America Reviews

"For the student who is being exposed to Bayesian statistics for the first time, McGrayne's book provides a wealth of illustrations to whet his or her appetite for more. It will broaden and deepen the field of reference of the more expert statistician, and the general reader will find an understandable, well-written, and fascinating account of a scientific field of great importance today."—Andrew I. Dale, Notices of the American Mathematical Society

"A very engaging book that statisticians, probabilists, and history buffs in the mathematical sciences should enjoy."—David Agard, Cryptologia

"Delightful . . . [and] McGrayne gives a superb synopsis of the fundamental development of probability and statistics by Laplace."—Scott L. Zeger of Johns Hopkins, Physics Today

"We now know how to think rationally about our uncertain world. This book describes in vivid prose, accessible to the lay person, the development of Bayes' rule over more than two hundred years from an idea to its widespread acceptance in practice."—Dennis Lindley, University College London

"A book simply highlighting the astonishing 200 year controversy over Bayesian analysis would have been highly welcome. This book does so much more, however, uncovering the almost secret role of Bayesian analysis in a stunning series of the most important developments of the twentieth century. What a revelation and what a delightful read!"—James Berger, Arts & Sciences Professor of Statistics, Duke University, and member, National Academy of Sciences

"Well known in statistical circles, Bayes’s Theorem was first given in a posthumous paper by the English clergyman Thomas Bayes in the mid-eighteenth century. McGrayne provides a fascinating account of the modern use of this result in matters as diverse as cryptography, assurance, the investigation of the connection between smoking and cancer, RAND, the identification of the author of certain papers in The Federalist, election forecasting and the search for a missing H-bomb. The general reader will enjoy her easy style and the way in which she has successfully illustrated the use of a result of prime importance in scientific work."—Andrew I. Dale, author of A History of Inverse Probability From Thomas Bayes to Karl Pearson and Most Honorable Remembrance: The Life and Work of Thomas Bayes

Sharon Bertsch McGrayne is the author of numerous books, including Nobel Prize Women in Science: Their Lives, Struggles, and Momentous Discoveries and Prometheans in the Lab: Chemistry and the Making of the Modern World. She lives in Seattle.