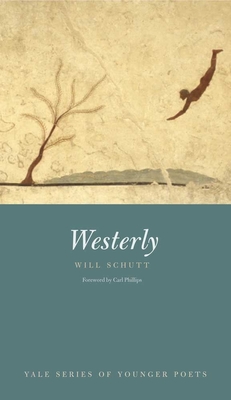 Will Schutt, Carl Phillips (Foreword by)

A young soldier dons Napoleon’s hat. An out-of-work man wanders Berlin, dreaming he is Peter the Great. The famous exile Dante finally returns to his native city to “hang his crown of laurels up.” Familial and historical apparitions haunt this dazzling collection of poems by Will Schutt, the 2012 recipient of the prestigious Yale Series of Younger Poets award.

Coupled with Schutt’s own voice are the voices of some of Italy’s most prominent nineteenth- and twentieth-century poets including Giacomo Leopardi, Alda Merini, Eugenio Montale, and Edoardo Sanguineti. Subtle, discerning, restrained, the poems in Westerly probe a vast emotional geography, with its contingent pleasures and pains, “where the door’s always dark, the sky still blue.”

…some narrow sickness buried you.

Whatever boyhood I had

fate hijacked too.  Old friend, is this that

world we stayed awake all night for?

Truth dropped in.  Far off,

your cool hand points the way.

"Will Schutt's Westerly takes on nothing less than, on the one hand, the ways in which we, the living, both late and soon, make our stumbling way westward, mostly oblivious to the fact of mortality and, on the other hand, how the dead make their resonant way back to us, sometimes as memory, sometimes as guide directing us toward and through the inevitable. . . . This is a book of uncommon wisdom. . . . Its poems sustain me.  They give me hope - which may very well be, among gifts, the one we need most."—Carl Phillips

“Schutt’s debut investigates death, life, and language with the intimate precision of a painter’s attention to a still life.”—Booklist
— Booklist

“The poems in Westerly explore dark existential territory with a kind of shimmering intelligence, and Schutt’s imagery is unexpected and beautifully wrought.”—Maria Browning, Chapter 16
— Maria Browning

“Westerly marks the debut of a poet whose skill on the page will continue to point our way forward.”—Blackbird
— Blackbird

Will Schutt’s poems and translations have appeared in Agni, A Public Space, FIELD, The Southern Review, and elsewhere. The recipient of fellowships from the Stadler Center for Poetry and the James Merrill House, he currently lives in New York City.