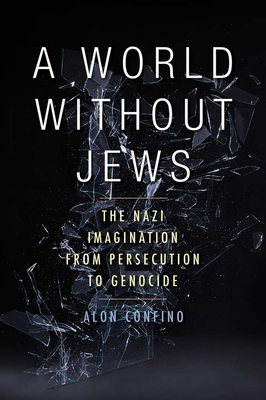 A World Without Jews (Hardcover)

The Nazi Imagination from Persecution to Genocide

Why exactly did the Nazis burn the Hebrew Bible everywhere in Germany on November 9, 1938? The perplexing event has not been adequately accounted for by historians in their large-scale assessments of how and why the Holocaust occurred. In this gripping new analysis, Alon Confino draws on an array of archives across three continents to propose a penetrating new assessment of one of the central moral problems of the twentieth century. To a surprising extent, Confino demonstrates, the mass murder of Jews during the war years was powerfully anticipated in the culture of the prewar years.

The author shifts his focus away from the debates over what the Germans did or did not know about the Holocaust and explores instead how Germans came to conceive of the idea of a Germany without Jews. He traces the stories the Nazis told themselves—where they came from and where they were heading—and how those stories led to the conclusion that Jews must be eradicated in order for the new Nazi civilization to arise. The creation of this new empire required that Jews and Judaism be erased from Christian history, and this was the inspiration—and justification—for Kristallnacht. As Germans imagined a future world without Jews, persecution and extermination became imaginable, and even justifiable.

Alon Confino is professor of History at the University of Virginia and at Ben Gurion University, Israel. He lives in Charlottesville, VA.

Praise For A World Without Jews: The Nazi Imagination from Persecution to Genocide…

"In this pioneering exploration and explanation of Nazi antisemitic violence as a failed cultural revolution, Alon Confino's presentation is compelling, convincing, and long overdue. Uncovering new evidence and reexamining what has been known in an original way, A World Without Jews is an important history of culture as an agent of genocide."—Wendy Lower, author of Hitler’s Furies, National Bood Award Finalist
— Wendy Lower

“A very original and persuasive account of the Holocaust. With style, imagination, and confidence, Confino has offered a telling critique of the reading of the Nazis as racial ideologues and shown how Nazi persecution was embedded in Christian imagery and memory.”—Mark Roseman, Indiana University
— Mark Roseman

"Thousands of books explain the political, social, and institutional origins of the Holocaust. As Alon Confino shows with style, sensitivity and nuance, the Nazis also built their racial state and committed genocide on the basis of German collective memory. An important and challenging book that pushes the boundaries of Holocaust history, A World Without Jews will be widely read and keenly debated."—Dan Stone, Royal Holloway, University of London
— Dan Stone

“In this refreshingly provocative re-reading of Nazi anti-Semitism, Alon Confino depicts a civilizational reordering of German origins and the making of a radically transgressive new European order.  He sensitively analyzes how this counter-narrative was cruelly and fanatically implemented from 1933 on and illustrates it in almost unbearably graphic photographs.”—Steven E. Aschheim, author of At the Edges of Liberalism
— Steven E. Aschheim

“Confino has done a great service by drawing our attention to the mythic dimension of the Nazis’ apocalyptic war against the Jews.”—David Biale, Los Angeles Review of Books
— David Biale

“Highly original and edifying . . . the writing is powerful and convincing and [Confino’s] evidence and conclusions will certainly push the boundaries of Holocaust scholarship and discussion for years to come.”—Michael N. Dobkowski, Jewish Book Council
— Michael N. Dobkowski

“One of the most important books on the Holocaust to be published in recent years . . . a historical breakthrough . . . accessible and fascinating.”—Amos Goldberg, H-Net Reviews
— Amos Goldberg

“Confino’s study is a triumphant demonstration that Nazi anti-Jewish policies are within the realms of comprehension and that it is possible to find the words to explain them accessibly and forcefully.”—David Cesarani, Fathom
— David Cesarani

“Incisive . . . a major new interpretation of the Holocaust . . . Confino is such a subtle and persuasive writer . . . his speculations are never less than compelling.”—Devin O. Pendas, German History
— Devin O. Pendas

“Confino is a fluent writer with an eye for salient episodes . . . He moves from bonfire to battlefield, composing a tapestry of unremitting horrors . . . [an] important book.”—Karl E. Meyer, Moment
— Karl E. Meyer

“A thoughtful, eloquent, and provocative work of intellectual and cultural history . . . [that] may change the state of play in Holocaust studies for years to come.”—Christopher J. Probst, Contemporary Church History Quarterly
— Christopher J. Probst

“Incisive . . . Confino [is] one of the most gifted historians of modern Germany . . . A World Without Jews sheds genuinely new light on the inner workings of the Third Reich.”—Thomas Weber, Contemporanea
— Thomas Weber

“I have read many books on the Holocaust . . . but I have found Confino’s book the most illuminating.”—Arnold D. Richards, Journal of the American Psychoanalytical Association
— Arnold D. Richards

“One of the most important books on the Holocaust to be published in recent years . . . both a methodological and a historical breakthrough.”—Amos Goldberg, Journal of Genocide Research
— Amos Goldberg
or
Not Currently Available for Direct Purchase
Copyright © 2020 American Booksellers Association