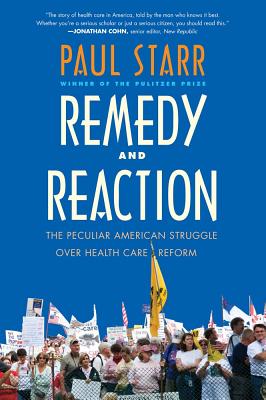 In no other country has health care served as such a volatile flashpoint of ideological conflict. America has endured a century of rancorous debate on health insurance, and despite the passage of the Affordable Care Act in 2010, the battle is not yet over. This book is a history of how and why the United States became so stubbornly different in health care, presented by an expert with unsurpassed knowledge of the issues..

Tracing health-care reform from its beginnings to its current uncertain prospects, Paul Starr argues that the United States ensnared itself in a trap through policies that satisfied enough of the public and so enriched the health-care industry as to make the system difficult to change.

He reveals the inside story of the rise and fall of the Clinton health plan in the early 1990s—and of the Gingrich counterrevolution that followed. And he explains the curious tale of how Mitt Romney’s reforms in Massachusetts became a model for Democrats and then follows both the passage of those reforms under Obama and the explosive reaction they elicited from conservatives. Writing concisely and with an even hand, the author offers exactly what is needed as the debate continues—a penetrating account of how health care became such treacherous terrain in American politics.


Praise For Remedy and Reaction: The Peculiar American Struggle over Health Care Reform…

"[A] clear, comprehensive, and compelling chronicle of the health care debate. . . . Starr is at the top of his game."—Glenn Altschuler, Huffington Post

"[An] interesting and engaging account of the many attempts made over the past century to reform care in this country. As daunting, even wonkish, as this may sound, Starr does an excellent job of explaining the different proposals and identifying the reasons why some succeeded where others failed so spectacularly."—Dennis Rosen, Boston Globe

"Remarkable. . . . There couldn't be a more astute insider to the politics of reform than Starr."—Publishers Weekly (starred review)


"Remarkable. . . . There couldn't be a more astute insider to the politics of reform than Starr. . . . Starr's history of America's battle over whether health care should be a right is an exacting look at politics and policies—and a challenge to Americans to overcome their fear and distrust in order to protect the sick and vulnerable."—Publishers Weekly (starred review)

"[A] remarkable chronicle of the hundred-year effort to legislate universal health insurance in the United States. . . ." —Bernard Avishai, The Nation


"First, [Starr] objectively draws together the threads of myriad voices and special interests in the centurylong American health-care debate and weaves them into a wholly comprehensible pattern. . . . Second, Starr cogently explains the highlights of the recently passed and highly controversial Affordable Care Act. . . . In sum, this self-admitted universal-health-care advocate and seasoned realist leaves readers questioning, as he does, whether Americans can 'summon the elementary decency toward the sick that characterizes other democracies.'"—Donna Chavez, Booklist (starred review)

"The best summary and political analysis of health care reform I’ve read. . . . Starr nails every nuance while taking the analysis one level deeper than any other treatment I’ve read."—Austin Frakt, The Incidental Economist

"A useful contribution as the country moves forward with the implementation of health-care reform."—Kirkus Reviews

"As a work of policy history Remedy and Reaction excels. . . . [Starr] chronicles just how difficult a struggle it has been to make the U.S. healthcare system more equitable and efficient and how far we still have to go."—Jonathan Oberlander, Science

"[A] remarkable chronicle of the hundred-year effort to legislate universal health insurance in the United States. . . . Nobody with a sense of history—that is, nobody who reads Starr’s book—could doubt how sensible and brave was the president’s effort to drive the Patient Protection and Affordable Care Act of 2010 through Congress."—Bernard Avishai, The Nation

"[A] useful and lucid history of American health reform. . . . Anyone seeking to understand how difficult it will be to implement President Barack Obama's health care reforms will be enlightened by Starr's readable and engrossing narrative. Highly recommended."—Jeff Goldsmith, Health Affairs

"Illuminating. . . . This book provides one of the clearest descriptions and best justifications of the Affordable Care Act published to date. . . . [An] excellent, cogently argued work."—Samuel Y. Sessions, Journal of the American Medical Association

"[I]f I were forced to assign only one book to summarize the historical context, political constraints, and policy dilemmas that shaped the 2010 Patient Protection and Affordable Care Act (PPACA), I would definitely choose this tart and briskly paced 300-page work. I would do the same if I had to recommend one book to a well-informed colleague who obsessively followed the 2009 and 2010 legislative debate leading up to the PPACA. I was surprised by how much I learned reading Remedy and Reaction, as I was a close observer and partisan participant in that story."—Harold Pollack, Public Administration Review


"Paul Starr has written a fascinating chronicle of America’s century-long journey to health reform that is, at once, erudite history, vivid journalism, and authoritative guide to a debate that will continue for decades."—Henry J. Aaron, co-author of Using Taxes to Reform Health Care

"Remedy and Reaction is the story of health care in America, told by the man who knows it best. Whether you're a serious scholar or just a serious citizen, you should read this."—Jonathan Cohn, senior editor, The New Republic


"Paul Starr, who gave us a magisterial account of the history of American medicine, now has given us the definitive account of the history of the struggle to enact health reform in America. Starr has done more than just study reform—he was a player in efforts to achieve it. Remedy and Reaction is in some ways thus an insider's history, which only enriches the experience of the reader. This book is a lively read, but has depth and insight. From its account of the early experiences in the twentieth century with reform, up through the disappointments in our lifetimes to achieve any comprehensive change, through the enactment of the Affordable Care Act and the story of its uncertain future, Remedy and Reaction is the definitive account of the history of health reform in America." —Norman Ornstein, co-author of The Broken Branch: How Congress Is Failing America and How to Get it Back on Track

"Few books as important as this one is are as clearly and compellingly written. Remedy and Reaction is a brilliant analysis of the political conflicts and compromises that led to the passage of the Affordable Care Act, and a fitting sequel to Paul Starr's masterful book, The Social Transformation of American Medicine. The final page came much too soon."—Shannon Brownlee, author of Overtreated: Why Too Much Medicine is Making Us Sicker and Poorer

Paul Starr is professor of sociology and public affairs, Princeton University, and cofounder and coeditor of The American Prospect. His 1984 book The Social Transformation of American Medicine won the Pulitzer Prize for Nonfiction and the Bancroft Prize in American history. A senior advisor on health policy in the Clinton White House, he writes frequently on national politics.
Loading...
or
Not Currently Available for Direct Purchase