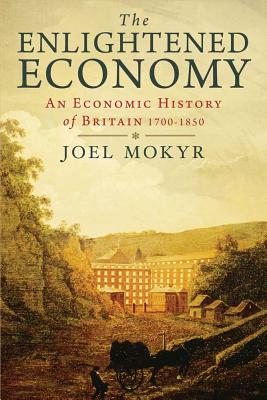 This book focuses on the importance of ideological and institutional factors in the rapid development of the British economy during the years between the Glorious Revolution and the Crystal Palace Exhibition. Joel Mokyr shows that we cannot understand the Industrial Revolution without recognizing the importance of the intellectual sea changes of Britain’s Age of Enlightenment.

In a vigorous discussion, Mokyr goes beyond the standard explanations that credit  geographical factors, the role of markets, politics, and society to show that the beginnings of modern economic growth in Britain depended a great deal on what key players knew and believed, and how those beliefs affected their economic behavior. He argues that Britain led the rest of Europe into the Industrial Revolution because it was there that the optimal intersection of ideas, culture, institutions, and technology existed to make rapid economic growth achievable. His wide-ranging evidence covers sectors of the British economy often neglected, such as the service industries.

"Perhaps some canny publisher should commission Mokyr to write an account of how Britain could summon up the thought processes of the 18th century to ride through the rough times ahead. If this spirited and erudite book is anything to go by, he would do a very good job." —Peter Marsh, Financial Times

“It is impossible to do justice to the subtlety and detail of 'The Enlightened Economy'; it is the product of a lifetime of research and thought, and stands as a landmark work of history; but more to the point, its perceptive examination of the birth of economic prosperity holds many arresting insights for our fraught economic times, where freedom is increasingly associated with government regulation and politicians appear all too-willing to accommodate new varieties of rent seeking.”—Trevor Butterworth, The Wall Street Journal

“It is impossible to do justice to the subtlety and detail of 'The Enlightened Economy'; it is the product of a lifetime of research and thought, and stands as a landmark work of history . . . its perceptive examination of the birth of economic prosperity holds many arresting insights for our fraught economic times.”—Trevor Butterworth, Wall Street Journal

"This book is beautifully executed from beginning to end. . . . This study of British industrialization is certain to be a classic text for generations to come."—Margaret Schabas, American Historical Review

“Mokyr’s book is a splendid achievement.”—Edward Glaeser, The New Republic

"The Enlightened Economy gives a new perspective on what is perhaps history's biggest and most important puzzle: Why are Western countries so rich today? What was the cause of the Industrial Revolution? Joel Mokyr argues that changes in ideas played the key role. He buttresses his argument with deep knowledge of the times and massive scholarship. Everyone interested in history should read this great work."—George A. Akerlof, University of California at Berkeley

"A great economic historian gives us a sweeping perspective on a pivotal period of history: Britain during the Industrial Revolution. Tracing a long series of economic innovations and political reforms back to the ideas of the Enlightenment, Joel Mokyr shows us the foundations of the modern world."—Roger B. Myerson, University of Chicago

"A comprehensive account and a persuasive interpretation of the British Industrial Revolution that combines clear economic analysis with profound historical insight. Thanks to Joel Mokyr's magisterial study, we can now see this burst of industrial creativity in its full social and intellectual context and, thereby, come to understand its true contemporary meaning. This enlightening book reveals like no other what it took, and what it takes, to achieve economic growth."—Jan de Vries, University of California at Berkeley

"Joel Mokyr is uniquely qualified to write such an ambitious book combining economic, political, social, and particularly intellectual history to give a comprehensive survey of the most dramatic era of societal change that led into the modern world.  It is a major accomplishment."—Douglass C. North, Hoover Institution, Stanford University

Joel Mokyr is Robert H. Strotz Professor of Arts and Sciences and professor of economics and history, Northwestern University, and Sackler Professor at the Eitan Berglas School of Economics, Tel Aviv University.