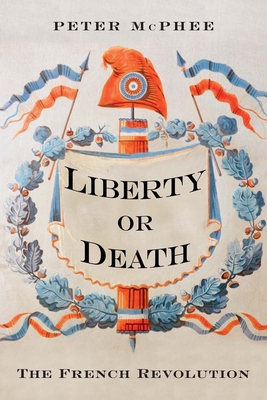 A strikingly new account of the impact of the French Revolution in Paris, across the French countryside, and around the globe

The French Revolution has fascinated, perplexed, and inspired for more than two centuries. It was a seismic event that radically transformed France and launched shock waves across the world. In this provocative new history, Peter McPhee draws on a lifetime’s study of eighteenth-century France and Europe to create an entirely fresh account of the world’s first great modern revolution—its origins, drama, complexity, and significance.

Was the Revolution a major turning point in French—even world—history, or was it instead a protracted period of violent upheaval and warfare that wrecked millions of lives? McPhee evaluates the Revolution within a genuinely global context: Europe, the Atlantic region, and even farther. He acknowledges the key revolutionary events that unfolded in Paris, yet also uncovers the varying experiences of French citizens outside the gates of the city: the provincial men and women whose daily lives were altered—or not—by developments in the capital. Enhanced with evocative stories of those who struggled to cope in unpredictable times, McPhee’s deeply researched book investigates the changing personal, social, and cultural world of the eighteenth century. His startling conclusions redefine and illuminate both the experience and the legacy of France’s transformative age of revolution.

Praise For Liberty or Death: The French Revolution…

"Richly detailed . . . finds way to both revivify and dissect the revolutionary passions through not just Paris, but throughout France, it’s colonies and eventually the rest of the world."—Ruth Scurr, Financial Times

"McPhee . . . skillfully and with consummate clarity recounts one of the most complex events in modern history. . . . [This] extraordinary work is destined to be the standard account of the French Revolution for years to come."—Publishers Weekly (starred review)

"Articulate and perceptive. . . . Numerous histories of the French Revolution exist; while many are good, none is so current on the literature and lucidly presented as this. Scholars and history lovers will rejoice."—David Keymer, Library Journal (starred review)

"Any card-carrying historian must record with admiration Peter McPhee’s remarkable mastery of the literature, the debates, and the generations of interpretation about the French Revolution. . . . McPhee’s splendid book — historiographically astute, sensitive to moral as well as political and social positions, beautifully written — provides a guide through the complexities of the Revolution and reflects on its legacy."—Robert Aldrich, Australian Book Review

"[E]xtraordinarily well-written. . . . [T]here is no doubt that Liberty or Death is an important book that represents a lifetime of archival research on the lives and experiences of ordinary people throughout the revolutionary decade."—Jeremy Hayhoe, H-France Review

"[A] clear and eminently readable account. . . . Both the text and the bibliography, which is unusually rich, will be of great service to all historians of the French Revolution."—Patrice Higonnet, Journal of Interdisciplinary History

"This engaging, accessible, and well-researched history of the French Revolution—complete with a chronology of events, a revolutionary calendar, and well-chosen illustrations—will appeal to the scholar, student, and general reader alike."—Cindy Ermus, Canadian Journal of History

"It is a credit to Peter McPhee's fair-mindedness that there is material for both interpretations in this fine and thought provoking book."—DMG Sutherland, EuropeNow

"Liberty or Death recounts the epic story of a people struggling to give birth to the modern concepts of popular sovereignty, human rights, religious toleration, equality before the law, the abolition of slavery, and the beginnings of gender equality. Rejecting the facile and antiquated view equating the French Revolution with blood and violence, McPhee reveals a nation tragically swept up in waves of fear and suspicion engendered by the revolutionary process itself and by the violence of the groups and foreign powers who sought to destroy all such transformations. It is a masterful synthesis by one of the world’s greatest specialists of the French Revolution."—Timothy Tackett, author of When the King Took Flight

"Peter McPhee is a superb historian, and in my view this is the finest full history of the French Revolution. McPhee carries memorable description and thoughtful analysis beyond France and Europe, presenting us with an intriguing, essential global dimension, including the Caribbean. It is a significant and absorbing book."—John Merriman, author of Massacre: The Life and Death of the Paris Commune

Peter McPhee serves as a professorial fellow at the University of Melbourne, and is an internationally esteemed historian of modern France. He lives in Abbotsford, Australia.
Loading...
or
Not Currently Available for Direct Purchase