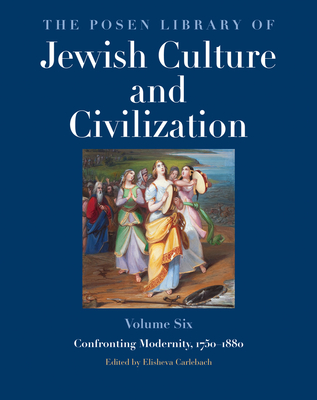 The Posen Library of Jewish Culture and Civilization, Volume 6

The Posen Library's landmark anthology series—called “a feast of Jewish culture, in ten volumes” by the Chronicle of Higher Education—explores Jewish culture and intellectual innovation in the modern age

“An essential collection of Judaica that ably combines the known and the obscure.”—Kirkus Reviews (starred review)

“Readers seeking primary texts, documents, images, and artifacts constituting Jewish culture and civilization will not be disappointed. More important, they might even be inspired. . . . This set will serve to improve teaching and research in Jewish studies at institutions of higher learning and, at the same time, promote, maintain, and improve understanding of the Jewish population and Judaism in general.”—Booklist (starred review)

“A spectacular array of sources, capturing the many facets of Jewish cultural creativity during a tumultuous era.”—Glenn Dynner, author of Yankel’s Tavern

This volume covers what Elisheva Carlebach describes as a period “in which every aspect of Jewish life underwent the most profound changes to have occurred since antiquity.” Organized by genre, this extensive yet accessible volume surveys Jewish cultural production and intellectual innovation during these dramatic years, particularly in literature, the visual and performing arts, and intellectual culture. The wide‑ranging collection includes a diverse selection of sources created by Jews around the world, translated from a dozen languages. Representing a tumultuous time of changing borders, demographic shifts, and significant Jewish migration, this anthology explores the range of approaches of Jews, from welcoming to resistant, to the intertwining ideals of enlightenment and emancipation, “the very foundation of the Jewish experience in this period.”

Praise For The Posen Library of Jewish Culture and Civilization, Volume 6: Confronting Modernity, 1750–1880…

“An essential collection of Judaica that ably combines the known and the obscure.”—Kirkus Reviews (starred review)

"A spectacular array of sources, capturing the many facets of Jewish cultural creativity during a tumultuous era."—Glenn Dynner, author of Yankel's Tavern: Jews, Liquor, & Life in the Kingdom of Poland

"Reflects almost all important aspects of Jewish civilization and culture in the eighteenth and nineteenth centuries."—Gershon Hundert, McGill University

"The introduction offers a masterful and elegant synthesis."—Francesca Trivellato, Institute for Advanced Study

Elisheva Carlebach is Salo Wittmayer Baron Professor of Jewish History, Culture, and Society and director, Institute for Israel and Jewish Studies, Columbia University. She is the author of several books, including Palaces of Time: Jewish Calendar and Culture in Early Modern Europe.

Deborah Dash Moore is Frederick G. L. Huetwell Professor of History and Professor of Judaic Studies at the University of Michigan. She is the author of several books, including GI Jews: How World War II Changed a Generation.