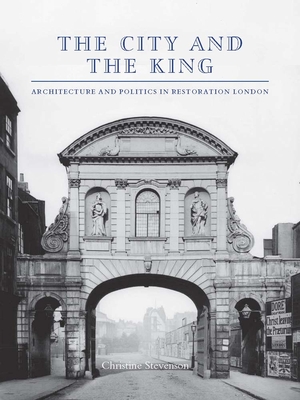 The City and the King (Hardcover)

Architecture and Politics in Restoration London

The City of London is a jurisdiction whose relationship with the English monarchy has sometimes been turbulent. This fascinating book explores how architecture was used to renew and redefine a relationship essential to both parties in the wake of two momentous events: the restoration of the monarchy, in 1660, and the Great Fire six years later.

Spotlighting little-known projects alongside such landmarks as Christopher Wren’s St. Paul’s Cathedral, it explores how they were made to bear meaning. It draws on a range of evidence wide enough to match architecture’s resonances for its protagonists: paintings, prints, and poetry, sermons and civic ceremony mediated and politicized buildings and built space, as did direct and sometimes violent action. The City and the King offers a nuanced understanding of architecture’s place in early modern English culture. It casts new light not only on the reign of Charles II, but on the universal mechanisms of construction, decoration, and destruction through which we give our monuments significance.

Christine Stevenson is senior lecturer at the Courtauld Institute of Art, University of London.


Praise For The City and the King: Architecture and Politics in Restoration London…

"A fascinating new book highlights how the relationship between the City of London and the monarchy was reflected in the architecture of the 17th century, which was the result of the Restoration of the monarchy in 1660 and the Great Fire of London six years later."—David Meara, The Times
— David Meara