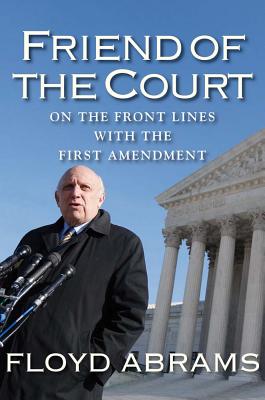 Friend of the Court (Hardcover)

On the Front Lines with the First Amendment

Since 1971, when the Pentagon Papers were leaked to the New York Times and furious debate over First Amendment rights ensued, free-speech cases have emerged in rapid succession. Floyd Abrams has been on the front lines of nearly every one of these major cases, which is also to say that, more than any other person, he has forged this country's legal understanding of free speech. Litigating everything from national-security and prior-restraint issues to controversies concerning the law of libel and attempts by local officials to censor art, Abrams has worked devotedly to protect the First Amendment, the crown jewel of America's Constitution.This collection of Abrams's writings gathers speeches, articles, debates, briefs, oral arguments, and testimony from his entire career. The writings illuminate topics of ongoing import: WikiLeaks, the correctness of the Citizens United case, journalist shield laws, and, not least, the responsibilities of the press. An exceptional writer and a brilliant thinker, Abrams offers a unique perspective on the First Amendment and the unparalleled rights it confers.

Floyd Abrams, a partner in the law firm of Cahill, Gordon & Reinde, has taught at Columbia School of Journalism, Yale Law School, and Columbia Law School.

Praise For Friend of the Court: On the Front Lines with the First Amendment…

“Vigorous, principled defenses of freedom of expression from a long career in the legal trenches.”—Kirkus Reviews


“In his long career, Abrams has been involved in most of the major cases challenging and defining free speech, from the Pentagon Papers to Citizens United to WikiLeaks. In this highly accessible collection, . . . Abrams explores the landscape of free-speech issues in the U.S. during the past 50 years.”—Booklist