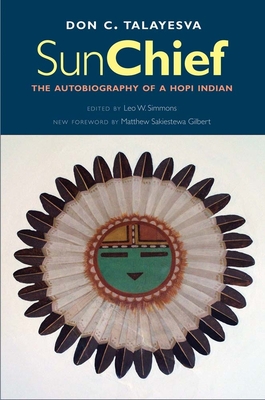 First published in 1942, Sun Chief is the autobiography of Hopi Chief Don C. Talayesva and offers a unique insider view on Hopi society. In a new Foreword, Matthew Sakiestewa Gilbert situates the book within contemporary Hopi studies, exploring how scholars have used the book since its publication more than seventy years ago.

Praise For Sun Chief: The Autobiography of a Hopi Indian (The Lamar Series in Western History)…

“Sun Chief is one of the great ethnographic autobiographies of Native American studies. Don Talayesva’s story is dramatic, humorous and insightful. This second edition contains a foreword written by Hopi scholar, Matthew Sakiestewa Gilbert, known for his excellent historical work on Hopi culture and education. He situates Sun Chief in the context of Hopi and white interaction and conflict, and raises important issues from a Hopi perspective.”—Armin W. Geertz, Aarhus University
— Armin W. Geertz


“Sun Chief is a seminal contribution to Hopi studies.  It has and continues to inform and inspire today’s emerging Hopi scholars who can expand on its relevancy to critical issues and events in contemporary Hopi society. More importantly, Gilbert points out that the field will benefit from “a new direction” in the developing scholarship that promises to forefront the Hopi view, experience and voice.”—Sheilah Nicholas (Hopi), University of Arizona
— Sheilah Nicholas

"This is an indispensable new edition of the classic Hopi autobiography. Matthew Sakiestewa Gilbert’s foreword brilliantly situates Talayesva’s story in scholarly as well as Hopi contexts, providing fresh insights into the achievements and limitations of the text—and of Hopi scholarship since its publication."—Tisa Wenger, author of We Have a Religion: The 1920s Pueblo Indian Dance Controversy and American Religious Freedom.
— Tisa Wenger

Don C. Talayesva (1890–1985) was born and raised in the Hopi village of Old Oraibi until the age of ten. He then spent nearly ten years training at white government schools. At the age of twenty, Talayesva returned to Hopiland and readopted Hopi tribal customs. Leo W. Simmons was a Yale anthropologist who recorded Talayesva’s autobiography. Matthew Sakiestewa Gilbert is associate professor of American Indian studies and history at the University of Illinois at Urbana-Champaign and enrolled with the Hopi Tribe. Robert V. Hine is professor emeritus of history at the University of California, Riverside.
Loading...
or
Not Currently Available for Direct Purchase