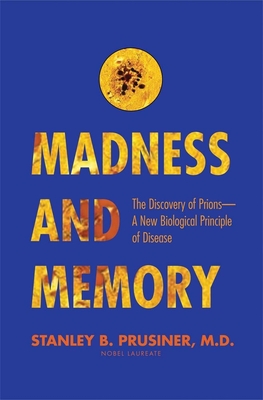 In 1997, Stanley B. Prusiner received a Nobel Prize, the world's most prestigious award for achievement in physiology or medicine. That he was the sole recipient of the award for the year was entirely appropriate. His struggle to identify the agent responsible for ravaging the brains of animals suffering from scrapie and mad cow disease, and of humans with Creutzfeldt-Jakob disease, had been waged largely alone and in some cases in the face of strenuous disagreement.

In this book, Prusiner tells the remarkable story of his discovery of prions—infectious proteins that replicate and cause disease but surprisingly contain no genetic material—and reveals how superb and meticulous science is actually practiced with talented teams of researchers who persevere. He recounts the frustrations and rewards of years of research and offers fascinating portraits of his peers as they raced to discover the causes of fatal brain diseases. Prusiner’s hypothesis, once considered heresy, now stands as accepted science and the basis for developing diagnoses and eventual cures. He closes with a meditation on the legacy of his discovery: What will it take to cure Alzheimer’s, Parkinson’s, Lou Gehrig’s and other devastating diseases of the brain?

Praise For Madness and Memory: The Discovery of Prions--A New Biological Principle of Disease…

“Madness and Memory is the story of one of the most important discoveries in recent medical history, and it is also a vivid and compelling portrait of a life in science.”—Oliver Sacks
— Oliver Sacks

"Perhaps not since James D. Watson’s 1968 memoir The Double Helix has the down and dirty business of world-class science been given such an airing . . . We are free to enjoy the spectacle of top gladiators at work in an utterly fascinating arena."—Abigail Zuger, M.D., New York Times
— Abigail Zuger, M.D.

“. . . the story hinges on Prusiner’s discovery of prions, ‘a new biological principle of disease’. It is a remarkable tale . . . [a] testament to the staggering intellect and courage involved in one of the most exciting discoveries since the DNA double helix.”—Giovanna Mallucci, Nature
— Giovanna Mallucci

“A unique story, yet many elements will be familiar to scientists in competitive fields. It is a cautionary tale about how vicious science can be, but . . . it could also encourage others to stick to their beliefs and rely on careful science as they meet obstacles.”— Ellen Daniell, author of Every Other Thursday: Stories and Strategies from Successful Women Scientists
— Ellen Daniell

“A strikingly meticulous book and a powerful effort from the heart to tell a large truth in a personal tale.”—Herman Wouk, author of The Winds of War and War and Remembrance
— Herman Wouk

"Prusiner does not give us the idealistic, sanitized picture of modern scientific research where cooperation and collaboration are commonplace. Rather, the author shows science today as it really is: competitive, crowded with too many people trying to get funding, involving sometimes massive egos at play instead of the search for truth, and rife with naysayers’ refusal to accept new ideas in spite of the data. Prusiner shows the science game as it is too often played today, and we are all better for his sharing."—Donald F. Calbreath, New York Journal of Books
— Donald F. Calbreath

"Madness and Memory is a fascinating account of scientific research, discovery, and controversy that will be of interest to many readers within neurology and neuroscience, as well as anyone drawn to the creative process."—Neurology Today
— Christopher M. Filley

"A wonderful account of the multiple obstacles confronted by Stanley Prusiner as he transformed an unconventional hypothesis into one of the greatest discoveries of modern science."—Robert J. Alpern, M.D., Dean, Yale University School of Medicine
— Robert J. Alpern

Stanley B. Prusiner, M.D., is director of the Institute for Neurodegenerative Diseases and professor of neurology at the University of California, San Francisco. The recipient of an array of scientific honors, he was awarded the Nobel Prize in Physiology or Medicine in 1997. He lives in San Francisco.
Loading...
or
Not Currently Available for Direct Purchase