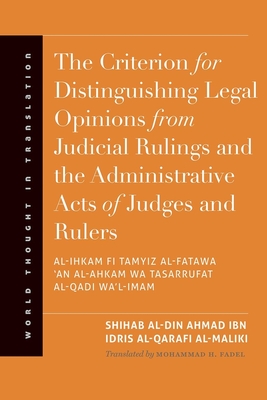 The first and much-needed English translation of a thirteenth-century text that shaped the development of Islamic law in the late middle ages.

Scholars of Islamic law can find few English language translations of foundational Islamic legal texts, particularly from the understudied Mamluk era. In this edition of the Tamyiz, Mohammad Fadel addresses this gap, finally making the great Muslim jurist Shihab al-Din al-Qarafi’s seminal work available to a wider audience. Al-Qarafi’s examination of the distinctions among judicial rulings, which were final and unassailable, legal opinions, which were advisory and not binding, and administrative actions, which were binding but amenable to subsequent revision, remained standard for centuries and are still actively debated today.

Shihab al‑Din al‑Qarafi (d. 1285) was an Islamic legal theorist. Mohammad H. Fadel is associate professor and former Canada Research Chair for the Law and Economics of Islamic Law (2006–2015) at the University of Toronto.
Loading...
or
Not Currently Available for Direct Purchase