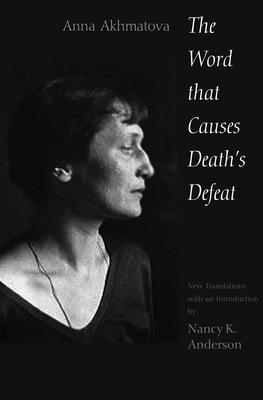 The Word That Causes Death's Defeat

Anna Akhmatova (1889–1966), one of twentieth-century Russia’s greatest poets, was viewed as a dangerous element by post-Revolution authorities. One of the few unrepentant poets to survive the Bolshevik revolution and subsequent Stalinist purges, she set for herself the artistic task of preserving the memory of pre-Revolutionary cultural heritage and of those who had been silenced. This book presents Nancy K. Anderson’s superb translations of three of Akhmatova’s most important poems: Requiem, a commemoration of the victims of Stalin’s Terror; The Way of All the Earth, a work to which the poet returned repeatedly over the last quarter-century of her life and which combines Old Russian motifs with the modernist search for a lost past; and Poem Without a Hero, widely admired as the poet’s magnum opus.
Each poem is accompanied by extensive commentary. The complex and allusive Poem Without a Hero is also provided with an extensive critical commentary that draws on the poet’s manuscripts and private notebooks. Anderson offers relevant facts about the poet’s life and an overview of the political and cultural forces that shaped her work. The resulting volume enables English-language readers to gain a deeper level of understanding of Akhmatova’s poems and how and why they were created.


Praise For The Word That Causes Death's Defeat: Poems of Memory…

“The importance of Akhmatova’s works in the Russian poetic tradition can scarcely be exaggerated. These works also hold a place of honor in the history of artistic engagement of moral responsibility.”—Olga P. Hasty, Princeton University

“Akhmatova is fortunate indeed to have won the attention of such a gifted translator and scholar. Anderson has succeeded in producing quite literally the best English-language translations of Akhmatova’s long poems.”—Susan Amert, University of Delaware

Nancy K. Anderson is an independent scholar. She is a highly regarded translator of Russian poetry, including Yale University Press’s translation of Alexander Pushkin’s Little Tragedies, and has taught courses in Russian, Tolstoy, and Dostoevsky at Yale University.