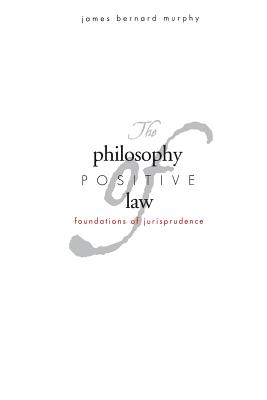 The Philosophy of Positive Law

In this first book-length study of positive law, James Bernard Murphy rewrites central chapters in the history of jurisprudence by uncovering a fundamental continuity among four great legal philosophers: Plato, Thomas Aquinas, Thomas Hobbes, and John Austin. In their theories of positive law, Murphy argues, these thinkers represent successive chapters in a single fascinating story. That story revolves around a fundamental ambiguity: is law positive because it is deliberately imposed (as opposed to customary law) or because it lacks moral necessity (as opposed to natural law)? These two senses of positive law are not coextensive yet the discourse of positive law oscillates unstably between them. What, then, is the relation between being deliberately imposed and lacking moral necessity? Murphy demonstrates how the discourse of positive law incorporates both normative and descriptive dimensions of law, and he discusses the relation of positive law not only to jurisprudence but also to the philosophy of language, ethics, theories of social order, and biblical law.

James Bernard Murphy is professor of government at Dartmouth College. He is the author of several books, including The Moral Economy of Labor: Aristotelian Themes in Economic Theory, published by Yale University Press.