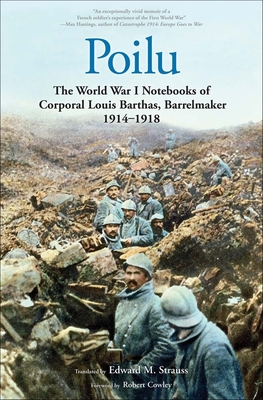 The World War I Notebooks of Corporal Louis Barthas, Barrelmaker, 1914-1918

Along with millions of other Frenchmen, Louis Barthas, a thirty-five-year-old barrelmaker from a small wine-growing town, was conscripted to fight the Germans in the opening days of World War I. Corporal Barthas spent the next four years in near-ceaseless combat, wherever the French army fought its fiercest battles: Artois, Flanders, Champagne, Verdun, the Somme, the Argonne. Barthas’ riveting wartime narrative, first published in France in 1978, presents the vivid, immediate experiences of a frontline soldier.

This excellent new translation brings Barthas’ wartime writings to English-language readers for the first time. His notebooks and letters represent the quintessential memoir of a “poilu,” or “hairy one,” as the untidy, unshaven French infantryman of the fighting trenches was familiarly known. Upon Barthas’ return home in 1919, he painstakingly transcribed his day-to-day writings into nineteen notebooks, preserving not only his own story but also the larger story of the unnumbered soldiers who never returned. Recounting bloody battles and endless exhaustion, the deaths of comrades, the infuriating incompetence and tyranny of his own officers, Barthas also describes spontaneous acts of camaraderie between French poilus and their German foes in trenches just a few paces apart. An eloquent witness and keen observer, Barthas takes his readers directly into the heart of the Great War.

Louis Barthas (1879–1952) was a cooper in a small town in southern France. Edward M. Strauss is a fundraising director in higher education and former publisher of MHQ: The Quarterly Journal of Military History. He lives in New York City.

Praise For Poilu: The World War I Notebooks of Corporal Louis Barthas, Barrelmaker, 1914-1918…

"A century after the guns of August first boomed, World War I has lost none of its power to boggle the mind. . . . Louis Barthas, an enlisted man from southwestern France, managed to reduce the conflict to human scale with a pen and 19 notebooks. . . . With Edward M. Strauss’s translation of Poilu, English-language readers now have access to a classic account of the war, a day-to-day chronicle of life in the trenches and a richly detailed answer to the seemingly unanswerable question: What was it like?"—William Grimes, New York Times
"Nothing ever written provides a more accurate, raw and close-in account of the beastly life of the common soldier. . ."—Marc Wortman, Daily Beast
"Barthas was an ordinary working man, a barrel maker of socialist inclinations, and there was nothing about him to suggest he harbored literary gifts or genius. But his notebooks, assembled under the title Poilu, are among the great works of the war, deserving a place of mention with memoirs like Guy Chapman’s A Passionate Prodigality and Ernst Jünger’s Storm of Steel."—Geoffrey Norman, Wall Street Journal
"One wonders why it took so long for an English translation—this is clearly one of the most readable and indispensable accounts of the death of the glory of war."—Nicholas Mancuso, Daily Beast
"The material here is raw and unvarnished—not just primary, but primal. This is not the grand stuff of geopolitics and strategy, nor of literary arcs and historical perspective, nor even of battlefield tactics and logistics. It is the day-to-day life of a foot soldier in the trenches."—Andrew Imbrie Dayton, The Washington Independent Review of Books
"Among World War I books being published in this centennial year of that conflict's start, none likely can connect readers more directly or vividly to the experience of those who fought it."—Alan Wallace, Pittsburgh Tribune-Review
"Barthas provides one of the best pictures of life in the trenches."—J.W. Thacker, Park City Daily News
"Barthas provides one of the best pictures of life in the trenches."—J.W. Thacker, Park City Daily News
"Barthas’ testimony, which exemplifies the title of this review and demonstrates the shared experiences of all the belligerents, is a superb addition to the many moving reminders of man’s bravery in the face of the futility of war."—Patricia M.E. Lorcin, Los Angeles Review of Books
"This translation of the diaries and letters of a French corporal on the Western front in World War I brings the gritty reality of trench warfare to an English-speaking audience in a manner unparalleled even in the best soldier writings from that war. The reader feels and smells and hears the mud, the blood, the fear, the deafening noise of exploding shells, the clatter of machine guns, the cries of the wounded and dying.  Here is the war as the men in the trenches experienced it."—James McPherson, author of Battle Cry of Freedom
"This book shows clearly and viscerally what were the origins of French soldiers’ pacifism. . . . Barthas’s voice is unlike any other I know in the vast literature on the First World War. The translation is excellent; the grittiness of the text is captured beautifully, and so is the humanity of the man who wrote it."—Jay Winter, Yale University
"Louis Barthas, cooper, citizen, cynic and reluctant reservist, is one of the truly authentic voices of the Great War. A classic in France from its first publication, his account of the fighting (and he saw more of it than most) speaks not only for the 'poilu' but for all solders of the conflict."—Hew Strachan, author of The First World War
"Ah, the notebooks of Louis Barthas! This book has profound historic value. It is also a genuine work of literature."—François Mitterrand, former president of France
"There is nothing like this for the French experience of WWI, almost nothing from equivalent British and German perspectives. . . . I believe this will be a major contribution to the study of Third-Republic France, the French army, and the First World War: regularly cited, regularly assigned."—Dennis Showalter, Colorado College