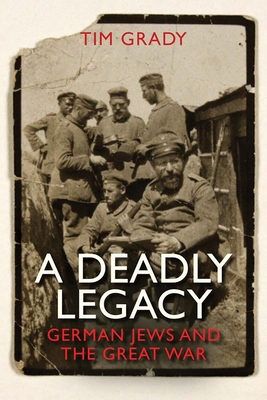 German Jews and the Great War

Shortlisted for the Wolfson History Prize 2018

This book is the first to offer a full account of the varied contributions of German Jews to Imperial Germany’s endeavors during the Great War. Historian Tim Grady examines the efforts of the 100,000 Jewish soldiers who served in the German military (12,000 of whom died), as well as the various activities Jewish communities supported at home, such as raising funds for the war effort and securing vital food supplies. However, Grady’s research goes much deeper: he shows that German Jews were never at the periphery of Germany’s warfare, but were in fact heavily involved.

The author finds that many German Jews were committed to the same brutal and destructive war that other Germans endorsed, and he discusses how the conflict was in many ways lived by both groups alike. What none could have foreseen was the dangerous legacy they created together, a legacy that enabled Hitler’s rise to power and planted the seeds of the Holocaust to come.

Tim Grady is reader in modern history, University of Chester, and author of The German Jewish Soldiers of the First World War in History and Memory. His book A Deadly Legacy: German Jews and the Great War was shortlisted for the Wolfson History Prize 2018. He lives in Merseyside, UK.
Loading...
or
Not Currently Available for Direct Purchase