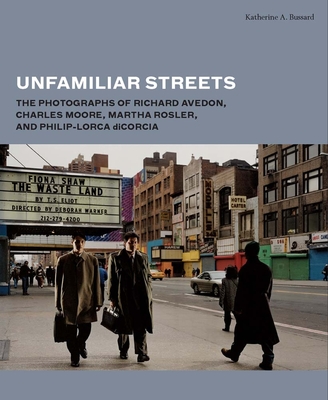 City scenes have been chronicled in photographs since the early 1800s, but street photography as traditionally defined has captured a relatively narrow field of these images. Revolutionizing the history of street photography, Unfamiliar Streets explores the work of Richard Avedon (1923–2004), Charles Moore (1931–2010), Martha Rosler (b. 1943), and Philip-Lorca diCorcia (b. 1951), four American photographers whose careers in fashion, photojournalism, conceptual art, and contemporary art are not usually associated with the genre.

Bussard’s lively and engaging text, a timely response to a growing interest in urban photography, challenges the traditional understanding of street photography and makes original and important connections among urban culture, social history, and the visual arts, constructing a new historical model for understanding street photography. Illustrated with more than one hundred images, this book provides an interpretation of a compelling genre that is as fresh as its consideration of the city streets themselves, sites of commerce, dispossession, desire, demonstration, power, and spectacle.

“No one who reads Bussard’s argument will think of street photography in quite the same way again.” ––Robin Kelsey, Harvard University
— Robin Kelsey

“Bussard moves through the broadness of her subject with ease, and her insights make it clear that, in the right hands, her suggested mode has much to offer. Stunning images, rolling questions, and a genuinely fresh way of viewing familiar subjects all come fruitfully together.”—Publishers Weekly
— Publishers Weekly

Katherine A. Bussard is Peter C. Bunnell Curator of Photography at the Princeton University Art Museum.
Loading...
or
Not Currently Available for Direct Purchase