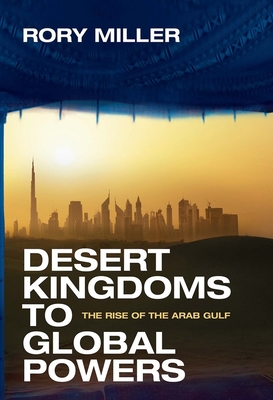 The Rise of the Arab Gulf

Once just sleepy desert sheikdoms, the Arab Gulf states of Saudi Arabia, Oman, the United Arab Emirates, Qatar, Bahrain, and Kuwait now exert unprecedented influence on international affairs—the result of their almost unimaginable riches in oil and gas. In this book, Rory Miller, an expert in Gulf politics and international affairs, provides an accessible account of the achievements of these countries since the 1973 global oil crisis. He also investigates how the shrewd Arab Gulf rulers who have overcome crisis after crisis meet the external and internal challenges of the onrushing future.

The Arab Gulf region has become an East–West hub for travel, tourism, sport, culture, trade, and finance. But can the autocratic regimes maintain stability at home and influence abroad as they deal with the demands of social and democratic reform? Miller considers an array of factors—Islamism, terrorism, the Arab Spring, volatile oil prices, global power dynamics, and others—to assess the future possibilities.

Praise For Desert Kingdoms to Global Powers: The Rise of the Arab Gulf…

'Rory Miller's readable and scholarly book, Desert Kingdoms to Global Powers, is a must-read for specialists and general readers. Today we take the key roles of Saudi Arabia, the UAE and others for granted. Miller has shown us, in his most accessible style, how these countries went from being some of the poorest places in the world to the wealthiest, with influence that was unimaginable just a few decades ago.'—Ambassador John Limbert, former Deputy Assistant Secretary of State for Iran

'Rory Miller's timely book, Desert Kingdoms to Global Powers, enriches our knowledge and broadens our understanding of the unprecedented rise of the Arab Gulf States in world economics and politics. The book is immensely useful for academics, specialists, students and general readers about how these once neglected desert kingdoms have started to assume a global role and leadership.'—Abdullah Baabood, director of the Gulf Studies Program, Qatar University

'Amidst decades of rapid development and the onset of conflicts across the Middle East, the Arab Gulf states – despite their relative size –  have become hugely influential actors on the world stage, albeit rife with internal contradictions, and caught between tradition and modernity. The struggle to resolve these tensions is a prominent theme across this impressive tome. Miller expertly guides the reader across the treacherous terrain of Gulf politics, bringing the subject matter to life by offering a rich and vibrant discussion of the region. His first-hand experience in the Gulf provides an important yet highly accessible analysis of an increasingly important region. This is an excellent book that captures the vivacious nature of Gulf politics, ultimately leaving the reader eager for more.'—Simon Mabon, author of Saudi Arabia and Iran: Power and Rivalry in the Middle East

'Rory Miller puts collective enterprise and individual achievement at the heart of an integrated perspective on the Gulf states which weaves together complex strands of oil, leadership and geopolitics. This factually rich and up-to-date account reveals how each state has pursued its own type of modernity, state security and social stability since the heyday of the nationalization of oil production, and illuminates the ways in which the American security guarantee, post-colonial sovereignty issues and the persistence of illiberal regimes have also shaped diplomatic strategies and policy adaptations. As China and Russia raise their stakes in the region, the Gulf States once again face challenges to policy autonomy in the face of rising pressures. Desert Kingdoms to Global Powers delivers the key to understanding the renewed importance of the region today and in the coming years.'—Dr Kun-Chin Lin, Director, Centre for Rising Powers, University of Cambridge

Rory Miller is professor of government at Georgetown University’s Edmund A. Walsh School of Foreign Service in Qatar. He advises various governmental and private organizations on issues relating to Gulf security and socioeconomic development. He lives in Qatar.
Loading...
or
Not Currently Available for Direct Purchase