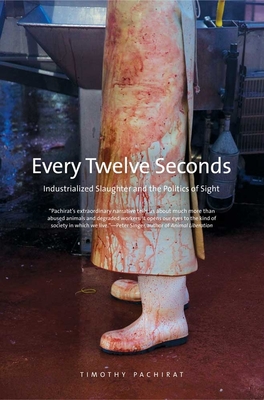 This is an account of industrialized killing from a participant’s point of view. The author, political scientist Timothy Pachirat, was employed undercover for five months in a Great Plains slaughterhouse where 2,500 cattle were killed per day—one every twelve seconds. Working in the cooler as a liver hanger, in the chutes as a cattle driver, and on the kill floor as a food-safety quality-control worker, Pachirat experienced firsthand the realities of the work of killing in modern society. He uses those experiences to explore not only the slaughter industry but also how, as a society, we facilitate violent labor and hide away that which is too repugnant to contemplate.

Through his vivid narrative and ethnographic approach, Pachirat brings to life massive, routine killing from the perspective of those who take part in it. He shows how surveillance and sequestration operate within the slaughterhouse and in its interactions with the community at large. He also considers how society is organized to distance and hide uncomfortable realities from view. With much to say about issues ranging from the sociology of violence and modern food production to animal rights and welfare, Every Twelve Seconds is an important and disturbing work.


Praise For Every Twelve Seconds: Industrialized Slaughter and the Politics of Sight (Yale Agrarian Studies Series)…

"The book is superbly written, especially given the grimness of the subject."—Mark Bittman, The New York Times, Opinionator column

"A firsthand account of various kinds of slaughterhouse work [in which] Timothy Pachirat did it all. . . . We can count ourselves lucky that Every Twelve Seconds is a very good book if not a flawless one. . . . It forces upon us an unacademic yet profound question: How can something be right, if it feels so horribly wrong?"—B. R. Myers, The Atlantic

"From June to December 2004, Pachirat (politics, New Sch.) worked at a cattle slaughterhouse in Nebraska. During his tenure, he worked in three distinct areas: in the cooler as a liver hanger, on the killing floor herding cattle to the knocking box, and in quality control. Through these disparate positions, he gained a thorough understanding of the formal and informal rules that govern American slaughterhouses. His conclusions are grim—bureaucracy and ineptitude combine in a way that does not bode favorably for food safety. He argues that industrialized slaughter is a hidden world tolerable only because it is invisible to most. Repugnant tasks like the ones associated with processing cattle should be more transparent and would perhaps be duly transformed as a result. Complete with meticulous diagrams showing each worker's position in the slaughterhouse, descriptions of each worker's job duties, and an appendix detailing cattle body parts and their uses, this compelling documentary work illuminates in great detail the workings of an industrial slaughterhouse. VERDICT For anyone curious about the origin of beef in America or those interested in the politics of concealment."—Diana Hartle, Univ. of Georgia Lib., Athens, Library Journal

"A lucid writer, Pachirat excels in explaining how a slaughterhouse works."—Ted Conover, The Nation

"A fascinating, gut-wrenching study—but absolutely not for the weak of stomach."—Kirkus Reviews

"[I]t would take an exceptionally visceral, in-depth account to make a meaningful contribution to the literature of animals suffering for our nourishment. That’s exactly what Timothy Pachirat provides in Every Twelve Seconds."—Tom Bartlett, Chronicle of Higher Education

"The fascination of Every Twelve Seconds lies in the meaty main chapters, which recount Pachirat’s passage through the hiring process and then into the factory and abruptly out of it, five months later."—Ted Conover, The Nation

"Pachirat thinks about the larger issues of killing in a satisfying, comprehensive way: how people in the plant handle it, and how he did."—Ted Conover, The Nation

"This is a masterful expose, written in crystalline prose. In tying the cruelty and dehumanization of industrialized slaughter to the politics of sight, the book adds to a growing canon of recent work . . . by extending people's understanding of and exacerbating human repugnance to one of the great moral failings of current times. Summing Up: Highly recommended."—Choice

"This book is important. Very important. [. . .]  buy it, read it, and share it with anyone who thinks they’re at peace with eating animals. After all, what Pachirat shows without telling, is that every time we eat animals we promote suffering that, should we confront it directly, we’d deem entirely unacceptable."—James McWilliams, Eating Plants blog

"The Jungle for the 21st century."—Portland Press Herald

“Eye-opening for students. . . . often fuels days of discussion among my students, who want to believe that ‘sunlight is the best disinfectant’ but are learning that change requires more than just visibility. . . . I would highly recommend this book,”—Abby Kinchy, Edge Effects

"Pachirat’s extraordinary narrative tells us about much more than abused animals and degraded workers. It opens our eyes to the kind of society in which we live."—Peter Singer, author of Animal Liberation

"You may not want to know what happens behind the walls of a modern slaughterhouse; but Pachirat’s extraordinary narrative tells us about much more than abused animals and degraded workers. It opens our eyes to the kind of society in which we live."—Peter Singer, author of Animal Liberation

"A truly stunning achievement. Every Twelve Seconds takes us into the slaughterhouse and asks: Why do we work so hard to conceal the daily routine of industrialized killing?  The result is a masterpiece that is as sophisticated as it is hard to put down."—Steve Striffler, author of Chicken: The Dangerous Transformation of America's Favorite Food

"By far the most thorough and immersive accounting of slaughterhouse operations in contemporary agribusiness."—Erik Marcus, author of Meat Market: Animals, Ethics, & Money

"Pachirat’s prose and tone are readable, horrific, and compelling. The documentary spell it casts recalls the steady, unflinching eye of Orwell’s Road to Wigan Pier. Astonishing."—John Bowe, author of Nobodies: Slave Labor in Modern America and the Dark Side of the New Global Economy

Timothy Pachirat is assistant professor, Department of Politics, The New School. He lives in Brooklyn, NY.
Loading...
or support indie stores by buying on