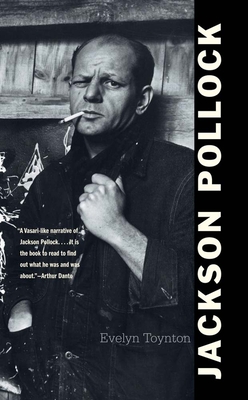 A compelling look at Jackson Pollock's vibrant, quintessentially American art and the turbulent life that gave rise to it

Jackson Pollock (1912–1956) not only put American art on the map with his famous "drip paintings," he also served as an inspiration for the character of Stanley Kowalski in Tennessee Williams's A Streetcar Named Desire—the role that made Marlon Brando famous. Like Brando, Pollock became an icon of rebellion in 1950s America, and the brooding, defiant persona captured in photographs of the artist contributed to his celebrity almost as much as his notorious paintings did. In the years since his death in a drunken car crash, Pollock's hold on the public imagination has only increased. He has become an enduring symbol of the tormented artist—our American van Gogh.

In this highly engaging book, Evelyn Toynton examines Pollock's itinerant and poverty-stricken childhood in the West, his encounters with contemporary art in Depression-era New York, and his years in the run-down Long Island fishing village that, ironically, was transformed into a fashionable resort by his presence. Placing the artist in the context of his time, Toynton also illuminates the fierce controversies that swirled around his work and that continue to do so. Pollock's paintings captured the sense of freedom and infinite possibility unique to the American experience, and his life was both an American rags-to-riches story and a darker tale of the price paid for celebrity, American style.

“Journalist and novelist Toynton . . . lends her multifarious talent to the story of the turbulent life of iconic artist Jackson Pollock. . . . Few are better suited to pen such a quotable and inspired contemporary portrait.”—Publishers Weekly
— Publishers Weekly

"This is a Vasari-like narrative of Jackson Pollock, and a case study of his depression, his propensity to get into fist fights when drunk, to be taciturn when sober, and to let himself be taken care of by the women in his life. But it is also a story of how he 'broke the ice,' in de Kooning's words, enabling American painters to take world leadership in a fresh style of painting—huge, abstract, emotional, and direct. It is the book to read to find out what he was and was about."—Arthur Danto, author of Andy Warhol
— Arthur Danto

“Toynton’s sensitive and incisive book sorts through the wreckage of an imagination out of which so much of contemporary art would go on to assemble itself.”—Kelly Grovier, Times Literary Supplement
— Kelly Grovier

Evelyn Toynton's work has appeared in Harper's, The Atlantic, The Times Literary Supplement, The New York Times Book Review, and The American Scholar. Her novel Modern Art, loosely based on the story of Lee Krasner and Jackson Pollock, was a New York Times Notable Book of the Year. Her most recent novel is The Oriental Wife, published in 2011. She lives in Norfolk, England.
Loading...
or
Not Currently Available for Direct Purchase