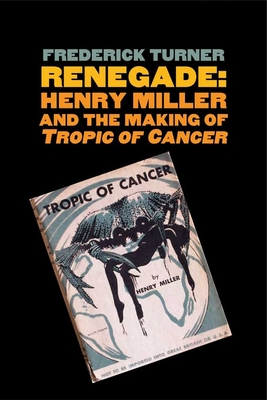 The untold story of Henry Miller’s explosive 1934 novel, banned in America for more than a quarter century

Though branded as pornography for its graphic language and explicit sexuality, Henry Miller’s Tropic of Cancer is far more than a work that tested American censorship laws. In this riveting book, published to coincide with the fiftieth anniversary of Tropic of Cancer's initial U.S. release, Frederick Turner investigates Miller’s unconventional novel, its tumultuous publishing history, and its unique place in American letters.

Written in the slums of a foreign city by a man who was an utter literary failure in his homeland, Tropic of Cancer was published in 1934 by a pornographer in Paris, but soon banned in the United States. Not until 1961, when Grove Press triumphed over the censors, did Miller’s book appear in American bookstores. Turner argues that Tropic of Cancer is “lawless, violent, colorful, misogynistic, anarchical, bigoted, and shaped by the same forces that shaped the nation.” Further, the novel draws on more than two centuries of New World history, folklore, and popular culture in ways never attempted before. How Henry Miller, outcast and renegade, came to understand what literary dynamite he had within him, how he learned to sound his “war whoop” over the roofs of the world, is the subject of Turner’s revelatory study.


Praise For Renegade: Henry Miller and the Making of "Tropic of Cancer" (Icons of America)…

“An entertaining and skillful evocation of the time when Miller’s memoir of bottom-feeding American expats in Paris was known as the dirtiest book in the world.”—Lee Sandlin, Wall Street Journal
— Lee Sandlin

“Tropic of Cancer was indeed groundbreaking, and as Turner demonstrates so well, the novel stirred such controversy . . . that it helped pave the way for the liberation of American letters.”—Ron Antonucci, Booklist
— Ron Antonucci

Frederick Turner is the author or editor of a dozen books, including Into the Heart of Life: Henry Miller at One Hundred. He lives in Santa Fe, New Mexico.
Loading...
or support indie stores by buying on