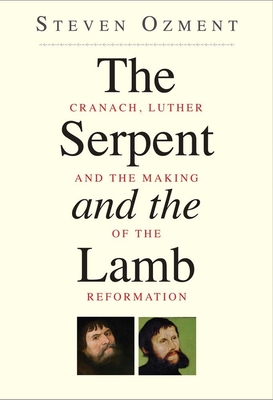 The Serpent and the Lamb

Cranach, Luther, and the Making of the Reformation

Together, Cranach's paintings and Luther's powerful oratory created a force field that transformed Germany, Europe, and ultimately the Western world

This compelling book retells and revises the story of the German Renaissance and Reformation through the lives of two controversial men of the sixteenth century: the Saxon court painter Lucas Cranach (the Serpent) and the Wittenberg monk-turned-reformer Martin Luther (the Lamb). Contemporaries and friends (each was godfather to the other’s children), Cranach and Luther were very different Germans, yet their collaborative successes merged art and religion into a revolutionary force that became the Protestant Reformation. Steven Ozment, an internationally recognized historian of the Reformation era, reprises the lives and works of Cranach (1472–1553) and Luther (1483–1546) in this generously illustrated book. He contends that Cranach's new art and Luther's oratory released a barrage of criticism upon the Vatican, the force of which secured a new freedom of faith and pluralism of religion in the Western world. Between Luther's pulpit praise of the sex drive within the divine estate of marriage and Cranach's parade of strong, lithe women, a new romantic, familial consciousness was born. The "Cranach woman" and the "Lutheran household"—both products of the merged Renaissance and Reformation worlds—evoked  a new organization of society and foretold a new direction for Germany.


Praise For The Serpent and the Lamb: Cranach, Luther, and the Making of the Reformation…

“Ozment describes Cranach’s many-faceted character . . . [and] makes a compelling case for Cranach’s importance as an artist and man of faith whose collaboration with the great Reformer was central to the spread of Protestantism.”—Debra Bendis, Christian Century
— Debra Bendis

"Ozment is determined to strip away the varnishes of 'a dark historiography' from Cranach and the early Reformation in order to reveal the artist standing in full light next to Martin Luther, not in any way obscured by his shadow. In this fascinating biography, it is not so much the influence of the Reformation on the arts that matters, but rather Cranach’s profound contributions to Reformation politics and culture. Ozment makes a bold claim for the transformative force of Cranach’s art."—David H. Price, author of Albrecht Dürer’s Renaissance: Humanism, Reformation and the Art of Faith

“Applying a historian’s eye to one of the greatest artists of the Reformation, Ozment paints an absorbing portrait of a cultural giant at the heart of tumultuous events. Martin Luther could not have found a truer friend, or a more brilliant craftsman, to bring his image to the public gaze.”—Andrew Pettegree, University of St Andrews
— Andrew Pettegree

“Ozment presents a compelling story of two great men of talent, Martin Luther and Lucas Cranach:  the spiritual revolutionary/writer, and the painter/illustrator. Their work and interaction brought about changes in the world—a freedom of expression affecting all of us right up until now.”—James Hendricks, University of Massachusetts Amherst
— James Hendricks

“Steven Ozment, master-historian of the Reformation, paints a broad and lively picture one of history’s most momentous—and most puzzling—collaborations. It comes as no surprise that Martin Luther changed the world, but that his incredible influence on the course of history was made possible largely through collaboration with his painter-friend Lucas Cranach: this is the surprising contention of this marvelously readable book.”—Joseph Leo Koerner, author of The Reformation of the Image
— Joseph Leo Koerner

“A brilliant and novel treatment of Cranach and Luther and their collaborative leadership of the Reformation. With meticulous research and silken prose, Steven Ozment rescues both these luminaries from their many misguided modern critics. This book is the start to a new history of Reformation theology and of Renaissance art. A stunning read!”—John Witte, Jr., Emory University
— John Witte, Jr.

"There are few historians more likely than Steven Ozment to provoke intense debate with each new thought-provoking book. This study is no exception, reintroducing the court painter, Lucas Cranach, not only as an amazing and exceptional artist (which no one doubts), but also--and more surprisingly--as a tireless advocate and endlessly resourceful propagandist for Luther's Reformation. Must reading for students of the Renaissance and Reformation."—David C. Steinmetz, Duke University
— David C. Steinmetz

"The Serpent and the Lamb is packed with stunning images and brilliant analysis, a sheer delight for serious readers of Reformation era history and art."—Brian Odom, Washington Independent Review of Books
— Brian Odom

“Masterful . . . Steven Ozment does a wonderful job of delivering history with a style that keeps the reader reading.”—Chris Enstad, Englewood Review of Books
— Chris Enstad

"This work will be of great interest to all those—theologians, historians of art, Christian ministers, or laypeople—who seek to understand better the role of visual art in the spread of the Reformation, which has significant implications for the church's worship and work today."—David McNutt, Anglican Theological Review
— David McNutt

Steven Ozment is McLean Professor of Ancient and Modern History, Harvard University. He is the author of ten books, including The Age of Reform, 1250–1550, which was a National Book Award finalist. He lives in Grantham, NH.
Loading...
or
Not Currently Available for Direct Purchase