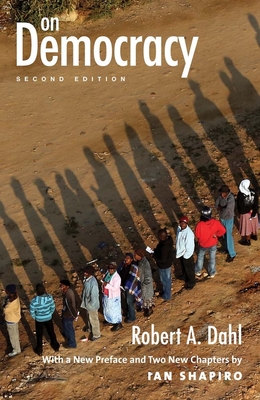 By Robert A. Dahl, Ian Shapiro (Preface by)

Written by the preeminent democratic theorist of our time, this book explains the nature, value, and mechanics of democracy. This new edition includes two additional chapters by Ian Shapiro, Dahl’s successor as Sterling Professor of Political Science at Yale and a leading contemporary authority on democracy. One chapter deals with the prospects for democracy in light of developments since the advent of the Arab spring in 2010. The other takes up the effects of inequality and money in politics on the quality of democracy, a subject that was of increasing concern to Dahl in his final years.

“The late Robert Dahl’s On Democracy is the source for how to govern democratically. Following the methods and channeling the insight of Dahl, Ian Shapiro’s new edition completes Dahl’s project and is must reading for the next generation and essential re-reading for the present.”—Michael Doyle, Columbia University

“Dahl’s tersest summary of the lessons of his profoundly influential interrogation of democracy’s strengths and weaknesses. Ian Shapiro shows forcefully what we have learned since its initial publication.”—John Dunn, author of Breaking Democracy’s Spell

“Robert A. Dahl’s On Democracy admirably synthesized the contributions of the world’s leading democratic theorist of the twentieth century. Now Ian Shapiro intelligently carries Dahl’s queries and concerns into our own century.”—Robert D. Putnam, author of Our Kids: The American Dream in Crisis

Praise For On Democracy…

"The two new chapters are extremely useful as they address in detail three compelling challenges to democracy, which Dahl had noted but not addressed at length. I also very much like the Preface as it will help my students put Dahl into a larger context and help them better understand the history of political science."—Alana Jeydel, American River College
"The introduction will help readers see On Democracy in the context of Dahl’s entire body of work, and will give students a sense of his importance to the field of modern political science."—Sally Howard, Concord University
"The new chapters succeed in both investigating the empirical basis of certain claims in the text, and thoughtfully evaluating the future of democracy and democratization in the context of the findings. As someone who has long assigned On Democracy to my students, I welcome this extension of the work and look forward to discussing it with my students."—David Faris, Roosevelt University
"Robert A. Dahl’s On Democracy admirably synthesized the contributions of the world’s leading democratic theorist of the twentieth century. Now Ian Shapiro intelligently carries Dahl’s queries and concerns into our own century."—Robert D. Putnam, author of Our Kids: The American Dream in Crisis
"The republication of Dahl’s classic work is an important event, enriched by the addition of a valuable preface on Dahl’s work, two new chapters, and an important appendix, all by the eminent democracy scholar Ian Shapiro."—Donald L. Horowitz, author of Constitutional Change and Democracy in Indonesia