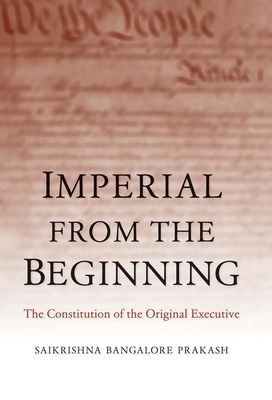 Imperial from the Beginning (Hardcover)

The Constitution of the Original Executive

Eminent scholar Saikrishna Prakash offers the first truly comprehensive study of the original American presidency. Drawing from a vast range of sources both well known and obscure, this volume reconstructs the powers and duties of the nation’s chief executive at the Constitution’s founding. Among other subjects, Prakash examines the term and structure of the office of the president, as well as the president’s power as constitutional executor of the law, authority in foreign policy, role as commander in chief, level of control during emergencies, and relationship with the Congress, the courts, and the states. This ambitious and even-handed analysis counters numerous misconceptions about the presidency and fairly demonstrates that the office was seen as monarchical from its inception.

Saikrishna Prakash is the James Monroe Distinguished Professor of Law and the Horace W. Goldsmith Research Professor at the University of Virginia. He lives in Charlottesville, VA.

Praise For Imperial from the Beginning: The Constitution of the Original Executive…

“A Herculean effort to gather together all the extant materials dealing with the formulation of Article II of the Constitution. . . . The amount of scholarship that went into this book is staggering. Its fairness and accuracy leap out of every page."—Richard Epstein, NYU Law School
— Richard Epstein

“By far and away the best and most comprehensive account available of the Framers’ original understanding of the powers and duties of the presidency.”--Steven Calabresi, Northwestern Law School
— Steven Calabresi