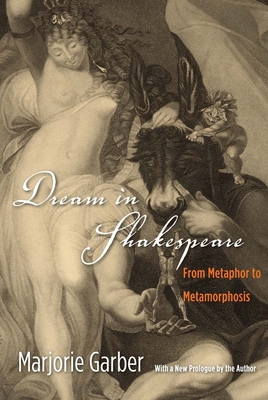 From Metaphor to Metamorphosis

Dream is a central image for Shakespeare, encompassing at once the terrors of the irrational and the creative powers of the imagination—one's deepest fears and highest aspirations. Used in the early plays as a verbal or structural device, dream becomes, in the tragedies and late romances, a transforming experience which leads the dreamer toward a moment of self-awareness. In this illuminating study, now reissued with a new preface by the author, Marjorie Garber skillfully charts the development of Shakespeare's use of dream from the opening lines of Richard III to the magic of A Midsummer Night’s Dream to Hamlet’s most famous soliloquy.


Drawing on the works of Freud and other psychologists, but basing its argument on the language and dramatic structure of the plays themselves, Dream in Shakespeare presents a coherent and innovative reading of the plays and their developing concept of dream.

Praise For Dream in Shakespeare: From Metaphor to Metamorphosis…

“In 1974 Dream in Shakespeare marked the debut of a young scholar with a rare gift for recognizing not only what is most Shakespearean about Shakespeare but what is at stake for us when we set out to interpret his vision. As fresh and perceptive as it was forty years ago, Dream in Shakespeare is one of those few critical monographs so beguiling that when one finishes reading it, one cries to dream again.”—Michael Dobson, Director of the Shakespeare Institute, Stratford-upon-Avon, and Professor of Shakespeare Studies, University of Birmingham
— Michael Dobson

“This reissue of Marjorie Garber’s Dream in Shakespeare will allow those who don’t yet know the book to discover the pleasure of reading a great critic on our greatest author. It will remind you of what Garber has always been so very good at doing: taking something that we thought we knew and showing us how much more interesting and surprising in fact it is.” —David Scott Kastan, George M. Bodman Professor of English, Yale University

Marjorie Garber is the William R. Kenan, Jr., Professor of English and Visual and Environmental Studies at Harvard University, and chair of the committee on Dramatic Arts. She lives in Cambridge, MA.
Loading...
or support indie stores by buying on
(This book is on backorder)