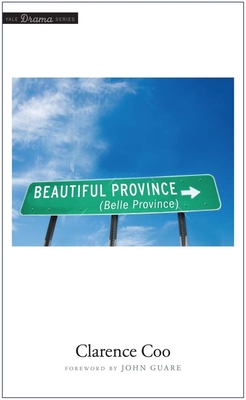 The 2012 winner of the Yale Drama Series

A fifteen-year-old boy decides to accompany his severely depressed high school French teacher on a road trip to the Canadian province of Quebec, where the mother tongue of Voltaire and Balzac is still spoken and cherished. Clarence Coo’s mesmerizing new play is a delicious amalgam of farce and tragedy, a carnival funhouse with very dark corners. Wildly inventive and heartbreakingly sad, the strange odyssey of Jimmy and the unpredictable Mr. Green takes many surprising turns, crossing the border from reality into unreality and back again while encountering displaced characters from history, literature, and the mundane, often dangerous world.

Selected by Tony Award–winning playwright John Guare (House of Blue Leaves, Six Degrees of Separation, and others) from over 1,000 submissions from 29 countries, Clarence Coo’s Beautiful Province is the sixth winner of the DC Horn Foundation/Yale Drama Series Prize. In his foreword, Guare calls Coo’s work “elusive and haunting . . . funny, desperate, insane,” praising it for “its intriguing story [and] its tone, sustained to the very end.” Lyrical and adventurous, Beautiful Province is an outstanding new theatrical work, well deserving of these accolades and more.

Clarence Coo is a resident playwright at New Dramatists, a member of the Ma-Yi Writers Lab, and a 2012–2013 Dramatists Guild fellow. He received his MFA in Playwriting at Columbia University, where he studied under Charles Mee, and is currently the program administrator of the Graduate Writing Program at Columbia’s School of the Arts.