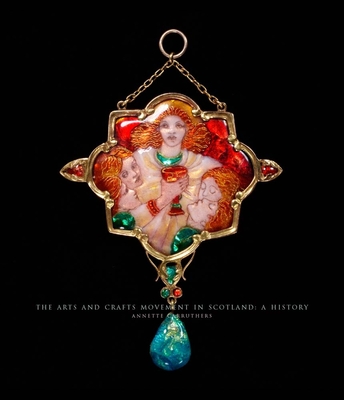 The Arts and Crafts Movement in Scotland

This authoritative book is the most detailed account to date of the Arts and Crafts movement in Scotland. Arts and Crafts ideas appeared there from the 1860s, but not until after 1890 did they emerge from artistic circles and rise to popularity among the wider public. The heyday of the movement occurred between 1890 and 1914, a time when Scotland’s art schools energetically promoted new design and the Scottish Home Industries Association campaigned to revive rural crafts. Across the country the movement influenced the look of domestic and church buildings, as well as the stained glass, metalwork, textiles, and other furnishings that adorned them. Art schools, workshops, and associations helped shape the Arts and Crafts style, as did individuals such as Ann Macbeth, W. R. Lethaby, Robert Lorimer, M. H. Baillie Scott, Douglas Strachan, Phoebe Traquair, and James Cromar Watt, among other well-known and previously overlooked figures. These architects, artists, and designers together contributed to the expansion and evolution of the movement both within and beyond Scotland’s borders.


Praise For The Arts and Crafts Movement in Scotland: A History…

‘In this meticulously researched and beautifully produced new study Carruthers presents a comprehensive account of the Arts and Crafts movement in Scotland, as pursued primarily by Scottish makers.’—Rosie Spooner, Burlington Magazine
— Roise Spooner

Annette Carruthers is a senior lecturer in the School of Art History at the University of St Andrews.