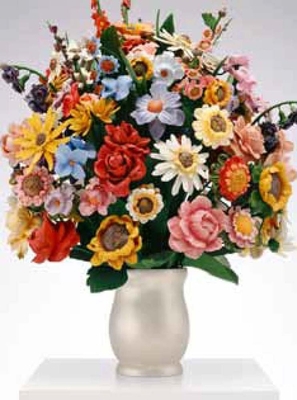 A fresh and engaging look at the controversial work of Jeff Koons, with insightful analyses and illustrations of all of his iconic pieces alongside preparatory works and historical photographs

Examining the breadth and depth of thirty-five years of work by Jeff Koons (b. 1955), one of the most influential and controversial artists of the 20th century, this highly anticipated volume features all of his most famous pieces. In an engaging overview essay, Scott Rothkopf carefully examines the evolution of Koons’ work and his development over the past thirty-five years, offering a fresh scholarly perspective on the artist’s multi-faceted career. In addition, short essays by a wide range of interdisciplinary contributors—from academics to novelists—probe provocative topics such as celebrity and media, markets and money, and technology and fabrication. Also included are preparatory sketches and plans for sculptures and paintings as well as installation photographs that shed light on Koons’ artistic process and trace the development of his work throughout his landmark career.

Koons has risen to international fame making art that reimagines and recontextualizes images and objects from popular culture such as vacuum cleaners, basketballs, and balloon animals. Created with painstaking attention to detail by a team of fabricators, these objects raise questions about taste and popular culture, and position Koons as one of the most lauded and criticized artists working today.

Praise For Jeff Koons: A Retrospective…

"Rothkopf’s clear and coolly measured catalogue introduction must be read by any serious critic of Koons, pro or con."—Peter Schjeldahl, New Yorker

"A good primer for this controversial artist."—Lucy Davies, The Daily Telegraph

"Despite his titanic art world status, Jeff Koons has never been the subject of a retrospective, nor of a book this comprehensive. Charting every significant series of works, from basketballs and vacuum cleaners to paintings and pornography to blown-up tchotchkes and balloon animals, along with a wealth of ephemera, the catalogue delivers. Eight pithy texts from a diverse array of academics, writers, scientists, and museum folk (the contributions from novelist Rachel Kushner and Renaissance scholar Alexander Nagel particularly shine) augment Whitney curator Scott Rothkopf’s essay."—Zoë Lescaze, ARTnews

Scott Rothkopf is the Nancy and Steve Crown Family Curator and Associate Director of Programs at the Whitney Museum of American Art in New York City.
Loading...
or
Not Currently Available for Direct Purchase