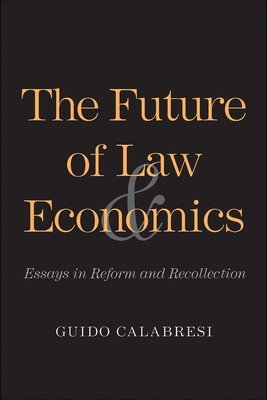 The Future of Law and Economics

Essays in Reform and Recollection

In a concise, compelling argument, one of the founders and most influential advocates of the law and economics movement divides the subject into two separate areas, which he identifies with Jeremy Bentham and John Stuart Mill. The first, Benthamite, strain, “economic analysis of law,” examines the legal system in the light of economic theory and shows how economics might render law more effective. The second strain, law and economics, gives equal status to law, and explores how the more realistic, less theoretical discipline of law can lead to improvements in economic theory. It is the latter approach that Judge Calabresi advocates, in a series of eloquent, thoughtful essays that will appeal to students and scholars alike.

Praise For The Future of Law and Economics: Essays in Reform and Recollection…

"Many readers will find much of interest in Calabresi’s engaging ruminations."—Eric Posner, Journal of Economic Literature

"Calabresi is persuasive in arguing that economists (and the rest of us) can learn a lot from careful investigation of what legal systems actually do."—Cass Sunstein, New York Review of Books

"A collection of original essays by one of the towering figures in the development of the economic analysis of law."—Sam Peltzman, University of Chicago

"Valuable and novel food for thought to the academic community and to the world at large."—Francesco Parisi, University of Minnesota

Guido Calabresi is a senior judge on the United States Court of Appeals for the Second Circuit and former dean and Sterling Professor Emeritus at Yale Law School.
Loading...
or
Not Currently Available for Direct Purchase