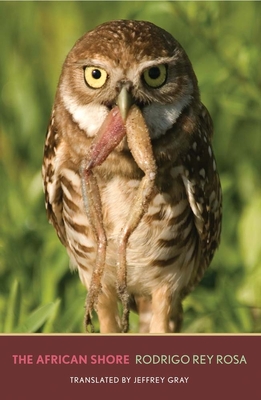 The African Shore (The Margellos World Republic of Letters) (Paperback)

A riveting and highly praised novel by Guatemala’s leading writer of fiction, now in English for the first time

In the vein of the writings of Paul Bowles, Paul Theroux, and V. S. Naipaul, The African Shore marks a major new installment in the genre of dystopic travel fiction. Rodrigo Rey Rosa, prominent in today’s Guatemalan literary world and an author of growing international reputation, presents a tale of alienation, misrecognition, and intrigue set in and around Tangier. He weaves a double narrative involving a Colombian tourist pleasurably stranded in Morocco and a young shepherd who dreams of migrating to Spain and of “riches to come.” At the center of their tale is an owl both treasured and coveted.

The author addresses the anxiety, distrust, and potential for violence that characterize the border of all borders: the strait that divides Africa and Europe, where the waters of the Mediterranean and the Atlantic meet. His often-remarked prose style, at once rich and spare, endows his work with remarkable elegance. Rey Rosa generates a powerful reality within his imagined world, and he maintains a narrative tension to the haunting conclusion, raising small and large questions that linger in the reader’s mind long after the final page.
With an Afterword by Jeffrey Gray

Rodrigo Rey Rosa is a prominent member of the Guatemalan literary scene. Many of his works of fiction have been translated and internationally acclaimed, including Dust on Her Tongue, The Beggar’s Knife, and The Pelcari Project, all translated into English by the late Paul Bowles. He lives in Guatemala. Jeffrey Gray is professor of English, Seton Hall University, New Jersey. He is author of Mastery’s End: Travel and Postwar American Poetry and editor of the Greenwood Encyclopedia of American Poets and Poetry.

Praise For The African Shore (The Margellos World Republic of Letters)…

“Rodrigo Rey Rosa is the most rigorous writer of my generation, the most transparent, the one that knows best how to weave his stories, and the most luminous of all.”—Roberto Bolaño

“I read Rodrigo Rey Rosa’s The African Shore in a single night. It is a slim volume, only 136 pages, but, more importantly, Rey Rosa is one of the most economical writers I’ve encountered in a long time. The exactitude and concise beauty of his prose illustrates not only what the characters do, but above all, what they see and what they perceive.”—Justin Alvarez, The Paris Review
— Justin Alvarez

“Bolaño wrote that Rey Rosa 'is the most rigorous writer of my generation, the most transparent, the one who knows best how to weave his stories, and the most luminous of all.' Rigorous and luminous, spare and sensual, terse and hilarious, horrifying yet with a poetic, supernatural and metaphysical imagination, his writing—like that found in the novella The African Shore, just out from Yale University Press in Jeffrey Gray’s translation—throws open windows in your mind as you read.”—Francisco Goldman, BOMB
— Francisco Goldman

“La orilla africana is expertly designed; it raises a series of small and large questions, which relay one another cunningly, maintaining narrative tension up to the haunting conclusion, and indeed beyond . . . It is tempting to call La orilla africana a minimalist novel, because of its scaled-down look, but that would be misleading. Although it systematically avoids emphasis, it touches on large and urgent themes.”—Chris Andrews, The Quarterly Conversation
— Chris Andrews

“A writer whose originality is such that he eludes all precedents or models “—J.A. Masoliver Ródenas, La Vanguardia

“A colossal writer in the Spanish language who, with the prodigious exactitude of his prose and the mathematic equilibrium of his narratives, draws from an abundance of techniques amplified by true talent.” —Javier Aparicio Maydeu, El Periódico

“A rare novel—perfectly executed, inhabited both by poetry and by silence—which must be included among the greatest work of a great novelist.” —Luis Alonso Girgado, El Correo Gallego

“The Guatemalan writer focuses his energy, certainly, on the subtle elements of his style: the speed, exactitude and concise beauty of his prose, combined with the elliptical flow of his narratives, continue to recommend him as a young master in the art of saying more with less.”—Gustavo Guerrero, Letras Libres

“The African Shore practically demands to be read. It is a contemporary tale of international encounters in cosmopolitan, but substantially transformed Tangier, which leaves us thinking and wondering. Anyone who has spent significant time in Morocco will recognize the world that Rey Rosa evokes in his wonderfully frugal prose. And those who have not will enter into a foreign world and encounter a beautiful story that defies full comprehension. Both will leave the land of The African Shore changed.”—The Quarterly Conversation
— The Quarterly Conversation

“The book reads like a vivid dream seen through an opium haze, and sentence-by-sentence, is beautiful.”—Three Percent
— Three Percent

"Exquisite . . . The North African setting (including Gibraltar) is as vivid and as enervating as the writings of Rey Rosa’s mentor.  I’ve been a fan of Bowles and Rey Rosa for years, especially the latter’s stories. It’s a pleasure to read this longer narrative . . . skillfully translated by Jeffrey Gray."—Charles R. Larson, Counterpunch
— Charles R. Larson

"Simple, elegant, and surprising . . . Rey Rosa was a protégé of Paul Bowles’s and, though many of Rey Rosa’s books are set in his home country of Guatemala, this one takes place in Tangier, which is textured, meandering, and dreamlike, as if seen through an opium haze."—Sarah Gerard, Vol. 1 Brooklyn
— Sarah Gerard

Finalist for the Best Translated Book Award organized by Three Percent, a resource for international literature based at the University of Rochester.
— Three Percent