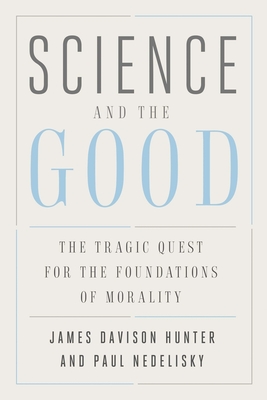 Science and the Good

In this illuminating book, James Davison Hunter and Paul Nedelisky trace the origins and development of the centuries-long, passionate, but ultimately failed quest to discover a scientific foundation for morality. The “new moral science” led by such figures as E. O. Wilson, Patricia Churchland, Sam Harris, Jonathan Haidt, and Joshua Greene is only the newest manifestation of that quest. Though claims for its accomplishments are often wildly exaggerated, this new iteration has been no more successful than its predecessors. But rather than giving up in the face of this failure, the new moral science has taken a surprising turn. Whereas earlier efforts sought to demonstrate what is right and wrong, the new moral scientists have concluded, ironically, that right and wrong don’t actually exist. Their (perhaps unwitting) moral nihilism turns the science of morality into a social engineering project. If there is nothing moral for science to discover, the science of morality becomes, at best, a feeble program to achieve arbitrary societal goals. Concise and rigorously argued, Science and the Good is a definitive critique of a would-be science that has gained extraordinary influence in public discourse today and an exposé of that project’s darker turn.


Praise For Science and the Good: The Tragic Quest for the Foundations of Morality (Foundational Questions in Science)…

“[This] important and timely book reminds us that ethics at its best challenges rather than justifies the status quo, which is why a purely descriptive science of ethics is never enough.”—Julian Baggini, Wall Street Journal

“Full of insightful commentary.”—Scott B. Rae, The Gospel Coalition

“They have produced a thoughtful summary and able criticism of the contemporary scientific quest for morality’s foundations, and have brought light to important matters.”—Mark Blitz, Claremont Review

“A brilliant and courageous book. . . . gives a methodical, but devastating blow to the notion that naturalism could ever produce a consistent ethic. Highly recommended.” —David Moore, TwoCities.org

“Excellent. . . . Hunter and Nedelisky are thorough and scholarly, and . . . nicer than I would have been . . . in representing the various positions in the debate. That is probably why the book is so effective. Rather than plunge into the debate as partisans, they operate more as its witnesses, describing and cataloguing what happened and meticulously exposing the fallacies.”—Ronald W. Dworkin, Law & Liberty

"Science and the Good is a compelling critique of half-baked ideas that have acquired pervasive and unwarranted influence in Anglophone public discourse today. One could not ask for a more timely and incisive contribution to contemporary cultural debate."—Jackson Lears, Board of Governors Distinguished Professor of History, Rutgers University

"Science and the Good provides an incisive and timely analysis of the pressing question: can science demonstrate what morality is and how we should live?  Hunter and Nedelisky carefully expose the inadequacies and dangers of ‘the new science of morality.’"—Peter Harrison, author of The Territories of Science and Religion