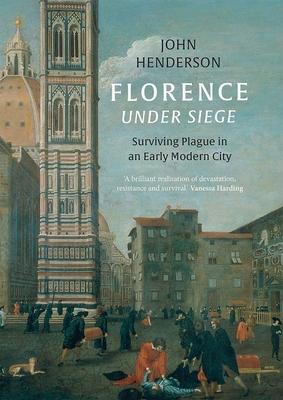 A vivid recreation of how the governors and governed of early seventeenth-century Florence confronted, suffered, and survived a major epidemic of plague

Plague remains the paradigm against which reactions to many epidemics are often judged. Here, John Henderson examines how a major city fought, suffered, and survived the impact of plague. Going beyond traditional oppositions between rich and poor, this book provides a nuanced and more compassionate interpretation of government policies in practice, by recreating the very human reactions and survival strategies of families and individuals.

From the evocation of the overcrowded conditions in isolation hospitals to the splendor of religious processions, Henderson analyzes Florentine reactions within a wider European context to assess the effect of state policies on the city, street, and family. Writing in a vivid and approachable way, this book unearths the forgotten stories of doctors and administrators struggling to cope with the sick and dying, and of those who were left bereft and confused by the sudden loss of relatives.

Praise For Florence Under Siege: Surviving Plague in an Early Modern City…

“Henderson effectively translates cosmologies and sensibilities of the premodern era through his attention to the religious priorities of all Florentines, rich and poor.”—Ann G. Carmichael, Bulletin of the History of Medicine

Longlisted for the 2020 Cundill History Prize, sponsored by McGill University

“Henderson offers a holistic account of plague in seventeenth-century Florence and reaches important new conclusions about the impact and effectiveness of public health measures. The fine detail of the story makes for a brilliant realisation of devastation, resistance and survival.”—Vanessa Harding, author of The Dead and the Living in Paris and London, 1500-1670

“In this vivid account, Henderson brings to life the fearful experiences of Florentines as they prepared, dealt with, and lived through an early modern public health crisis … Essential reading.”—Brian Maxson, author of The Humanist World of Renaissance Florence

“With a keen attention to gender, power and social networks, Henderson traces a vivid picture of resilience and survival through the complex interplay of plague and piety.”—Giulia Calvi, author of Histories of a Plague Year

“Henderson draws on a striking range of sources to present a human-scale fresco. He shows how townspeople, eager to save their souls as much as their skin, strove to cope and survive each in their own way … Re-sets our understanding of what plague meant at every level of early modern society to those caught up in it.”—Colin Jones, author of The Medical World of Early Modern France

John Henderson is professor of Italian renaissance history at Birkbeck, University of London, and Emeritus Fellow of Wolfson College, Cambridge. His publications include The Renaissance Hospital and The Great Pox with Jon Arrizabalaga and Roger French.
Loading...
or
Not Currently Available for Direct Purchase