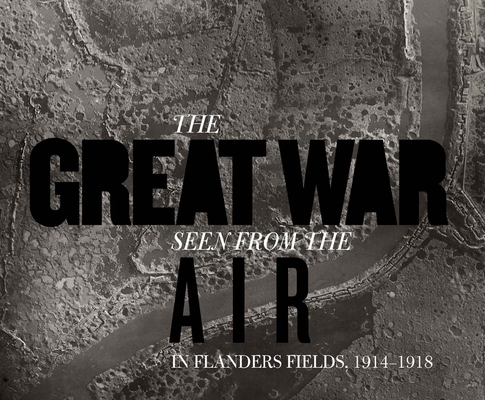 The Great War Seen from the Air

A remarkable photographic record of World War One, its relentless progression and the destruction it wrought, as seen from the skies above Flanders Fields

Aerial photography was a relatively new technology at the onset of World War I and was embraced as an indispensable tool of wartime intelligence by all nations involved in the conflict.  As a result, thousands of photographs taken from the air over the battlefields of the Great War have survived in archives throughout Europe, Australia, and the United States. These pictures present the war from a unique perspective, clearly showing the developing trench system, artillery batteries, bunkers, railway lines, airfields, medical evacuation routes, and more. They reveal the expanding war in Flanders Fields as the hostilities spread, kilometer by kilometer, devastating the environment and resulting in the complete destruction of the landscape at the front.

This illuminating volume, the results of a collaboration between the In Flanders Fields Museum, Ypres, the Imperial War Museum, London, and the Royal Army Museum, Brussels, features hundreds of photographic case studies, illustrating in unprecedented detail the physical extent of World War I and the shocking environmental damage it left in its wake. Supplementing aerial images with maps, documents, and photos taken from the ground, this one-of-a-kind visual record stands as an important contribution to World War I history, revealing the wartime landscape of Flanders Fields as rarely seen before.

“Splendid . . . chilling . . . Publishers are flooding the market with books describing various aspects of [the Great War]. But none of them can surpass this book's visual explanation.”—Anthony Brandt (blog review)
— Anthony Brandt

"Stichelbaut and Chielens offer a meticulous work based on careful examination of WWI aerial photographs taken in Flanders, in northern Belgium. This volume investigates how the war, in all of its tragic dimensions, destroyed, modified, and altered features of the terrestrial topography and landscape."—P.D. Thomas, CHOICE
— P.D. Thomas

“The photographs collected in [this] book give modern readers a new perspective on the war. . . . Even from a thousand feet in the air, it’s a crushing thing to see.”—Nick Stockton, Wired
— Nick Stockton

“[An] unusual, pathbreaking book . . . unique . . . accessible . . . forcefully clarifies how massive an endeavor the Great War really was . . . [and] presents awful and inspiring visual confirmation of the written record of the war in the trenches.”—Cathal J. Nolan, Michigan War Studies Review
— Cathal J. Nolan

Birger Stichelbaut is a postdoctoral researcher based in the department of archaeology, Ghent University, Belgium.

Piet Chielens is coordinator of the In Flanders Fields Museum in Ypres.
Loading...
or
Not Currently Available for Direct Purchase