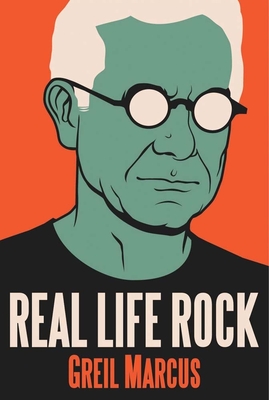 From the author of The History of Rock ’n’ Roll in Ten Songs comes his “Basement Tapes”: the complete “Real Life Rock Top 10” columns

For nearly thirty years, Greil Marcus has written a remarkable column called “Real Life Rock Top Ten.” It has been a laboratory where he has fearlessly explored and wittily dissected an enormous variety of cultural artifacts, from songs to books to movies to advertisements. Taken together, his musings, reflections, and sallies amount to a subtle and implicit theory of how cultural objects fall through time and circumstance and often deliver unintended consequences, both in the present and in the future.

Real Life Rock reveals the critic in full: direct, erudite, funny, fierce, vivid, uninhibited, and possessing an unerring instinct for art and fraud. The result is an indispensable volume packed with startling arguments and casual brilliance.

Greil Marcus's books include Mystery Train: Images of America in Rock ’n’ Roll Music, Lipstick Traces: A Secret History of the Twentieth Century, and The History of Rock ’n’ Roll in Ten Songs. He teaches at Berkeley and the Graduate Center at the City University of New York.

“This new book (of old snippets) is superb.”—Dwight Garner, of the New York Times (via Twitter)
— Dwight Garner

“Real Life Rock redeems the list format from the current proliferation of "listicles"—and paces it as a thing cultural consumers have always employed for sanity, a way to force some order into an insatiable and unwieldy habit. . . . It’s a good time for this book: Real Life Rock reminds skeptics that capsule reviews have a long and rich tradition.”—Sam Lefebvre, Pitchfork
— Sam Lefebvre

“Even Marcus fans who have never read a single one of these columns will recognize some of the writer’s favorite topics from Dada to Dylan to punk to Randy Newman to the legend of Stagger Lee, all of which make multiple appearances through the book’s 500-plus pages. If that page count seems daunting, fear not. There isn’t an entry you’ll want to skip.”—Adam Ellsworth, The Arts Fuse
— Adam Ellsworth

“Stunning; even in the capsule format, the energy and breathlessness of Marcus’ prose is electrifying. . . a history of three-plus decades of American popular culture, told not in the familiar touchstones, but in bootlegs, B-sides, sidebars, and secrets.”—Jason Baily, Flavorwire
— Jason Baily

“Even if you aren’t running to your computer to stream some of these tracks and albums he wrote about over the years, you’ll still be stopping in your tracks to admire the economy of Marcus’s writing for this column. In as short as about 100 – 150 words, he can take you deep within the heart of a particular album or live performance, or dismiss something cheekily out of hand with a small wave.”—Robert Ham, SpectrumCulture.com
— Robert Ham

“Real Life Rock sprawls and rejoices and bitches and moans depending on what’s happening in the world. And yet each book examines the commonplace as a subject and a way of being, as a language anyone might use and a way of listening that’s true to ordinary life and all its plainness, order, customs, and moments of the unexpected.”—Robert Loss, The Los Angeles Review of Books
— Robert Loss

“Mr. Marcus’s magpie columns collect stray opinions: on songs, movies, books, politics, moments. They make up a kind of underground cultural history of the past three decades, and the items in each column are by turns beautiful, strange, funny and vicious. This feels like both Mr. Marcus’s official bootleg and a reference book of a very high caliber.”—Dwight Garner, The New York Times, Holiday Gift Guide 2015 section
— Dwight Garner

“A truly amazing body of work, with Marcus delivering insightful thoughts on a wide range of topics, including books, movies, art shows, concerts, spam emails, and, more than anything else, music. This is essential reading for anyone interested in critical writing”—Matthew Perpetua, BuzzFeed, “21 Great Books About Music for 2015”
— Matthew Perpetua

“Real Life Rock collects 29 years of Greil Marcus' unique real life rock columns, each of which stuffs opinions about books, movies and politics into entries about music and vice versa. If you doubt that monthly columns assembled in bits and pieces can hold up over time, I direct you to page 141 and his remarks on a 1995 FRONTLINE documentary about Hillary Clinton. Marcus' words read like tomorrow's news and they definitely rock.”—Ken Tucker, NPR’s “Fresh Air”
— Ken Tucker
or
Not Currently Available for Direct Purchase
Copyright © 2020 American Booksellers Association