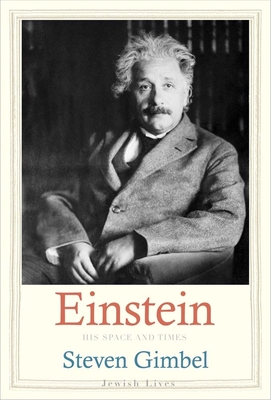 His Space and Times (Jewish Lives)

The commonly held view of Albert Einstein is of an eccentric genius for whom the pursuit of science was everything. But in actuality, the brilliant innovator whose Theory of Relativity forever reshaped our understanding of time was a man of his times, always politically engaged and driven by strong moral principles. An avowed pacifist, Einstein’s mistrust of authority and outspoken social and scientific views earned him death threats from Nazi sympathizers in the years preceding World War II. To him, science provided not only a means for understanding the behavior of the universe, but a foundation for considering the deeper questions of life and a way for the worldwide Jewish community to gain confidence and pride in itself.

Steven Gimbel’s biography presents Einstein in the context of the world he lived in, offering a fascinating portrait of a remarkable individual who remained actively engaged in international affairs throughout his life. This revealing work not only explains Einstein’s theories in understandable terms, it demonstrates how they directly emerged from the realities of his times and helped create the world we live in today.


Praise For Einstein: His Space and Times (Jewish Lives)…

“The time is now ripe for a short book, summarizing briefly the well-known facts about Einstein’s rocky road as a husband and father and scientist, and emphasizing his lasting importance as a politician and a philosopher. This book is accurate and well balanced. It presents Einstein’s Jewish heritage as he saw it himself, not as the core of his being, but as a historical accident bringing inescapable responsibilities. The reasons for reading this book are also simple. . . . There are a few scientists whose lives and thoughts are of perennial interest, because they permanently changed our way of thinking. To the few belong Galileo and Newton and Darwin, and now Einstein. . . . New books will need to be written and read, because these people had enduring ideas that throw light on new problems as the centuries go by.”—Freeman Dyson, New York Review of Books
— Freeman Dyson

"What makes Gimbel’s book different is its brevity and its emphasis on these cultural and political aspects of the man. Gimbel is a philosopher. . . yet at the same time the explanations of the science are exemplary—swift and clear."—Bryan Appleyard, Sunday Times (London)
— Bryan Appleyard

Steven Gimbel was previously the Edwin T. and Cynthia Shearer Johnson Chair for Distinguished Teaching in the Humanities as well as chair of the philosophy department at Gettysburg College. He lives in Mount Airy, MD.
Loading...
or
Not Currently Available for Direct Purchase