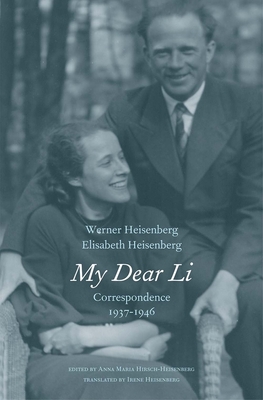 Nobel Prize–winning physicist Werner Heisenberg lived far from his wife, Elisabeth, during most of the Second World War. An eminent scientist, Werner headed Germany’s national atomic research project in Berlin, while Elisabeth and their children lived more safely in Bavaria. This selection of more than 300 letters exchanged between husband and wife reveals the precarious nature of Werner’s position in the Third Reich, Elisabeth’s increasingly difficult everyday life as the war progressed, and the devoted relationship that gave strength to them both.

These letters provide a fascinating new perspective on Werner’s much-debated wartime work and his attitude toward the atomic bomb. They also shed light on his reluctance to emigrate despite the urging of friends. An excerpt from his private diary, an introduction and notes by his daughter, and a selection of personal family photographs complete this compelling volume.

“The wartime correspondence of the physicist Werner Heisenberg and his wife Elisabeth offers a rare and personal account of the greatest calamity of modern times. Hitler, politics, the course of the war, Heisenberg’s secret work on nuclear fission, his concern for scientific friends in countries occupied by Germany—all were too dangerous for frank discussion in private letters that secret police might open at random. So the war is muffled but the man is open for all to read. More than any other book or document, these letters reveal unmistakably what Heisenberg cared about most, and the kind of man he was.”—Thomas Powers, Pulitzer prize-winning journalist and author of Heisenberg's War
— Thomas Powers

"Both Heisenberg and his wife later wrote accounts of the war years, but their letters, filled with the worries and hopes of ordinary family life, offer a quieter, more intimate picture..."—The New York Review of Books

“His letters in this handsome volume give the clear impression that he simply wanted the war to be over as quickly as possible so that he could get back to ordinary life with his family, and to his science. . . . Anna Maria Hirsch-Heisenberg, Werner and Elisabeth’s eldest daughter, has done a fine job of editing the correspondence, and the English translation by their daughter-in-law Irene Heisenberg is pleasingly colloquial.”–Times Higher Education

“The selected letters . . . offer an intimate portrait of husband and wife as they negotiated research and family life in a raging war.”—Choice
— Choice

“This wartime correspondence—between Werner Heisenberg, the inventor of quantum mechanics and 1932 Nobel Laureate in Physics, and his wife Elisabeth—provides fascinating insights into their life under a dictatorship.”—Konrad Kleinknecht, president of the Heisenberg Society, Munich
— Konrad Kleinknecht